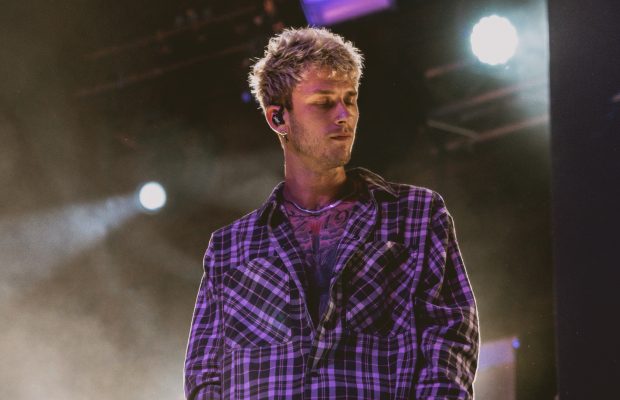 After a truly emphatic performance at major UK festival ‘Reading & Leeds festival’ Machine Gun Kelly kicked off the European leg of his Hotel Diablo tour in what was his first show in Manchester since 2017. Funnily enough MGK , real name Colson, seems to have an unfortunate past in Manchester with him posting on Instagram about being hit by a bus 6 years ago in the city! A story he now tells with a tattoo of the memory however this night in Manchester would go on to be much more of a memorable event with the packed out crowd in full rage mode the entire night.

As a follower of MGK’s music for well over 5 years it’s been crazy to see the Cleveland rapper’s success in the past 2 years especially, with headline shows across the world, opening up for Fallout boy, heated rivalry with rap legend Eminem and his most recent album release ‘Hotel Diablo’. The O2 Ritz saw a sold out crowd as members of Colson’s fandom lined up for hours on end in the bsuy Manchester streets to see their idol perform. The stage for the night was set with fantastic LED visuals, his signature serpent microphone and smoke machines galore, I myself have never seen such a technical setup at this venue and it added to the energy of the night and the fast paced musical talents of Colson.

The instrumental based song ‘Sex Drive’, from the recently released Hotel Diablo album, kicked off the night as a mix visuals played to further hype up the crowd until the song peaked and MGK appeared behind the parted doors to greet his crowd. In what can only be described as ground shaking energy the crowd reacted to every song the rapper played with such force I thought the venue would collapse! As the night went on hit songs and throwbacks to previously released EP’s would be played such as the infamous ‘Rapdevil’, ‘LOCO’, ‘El diablo’ and much much more.