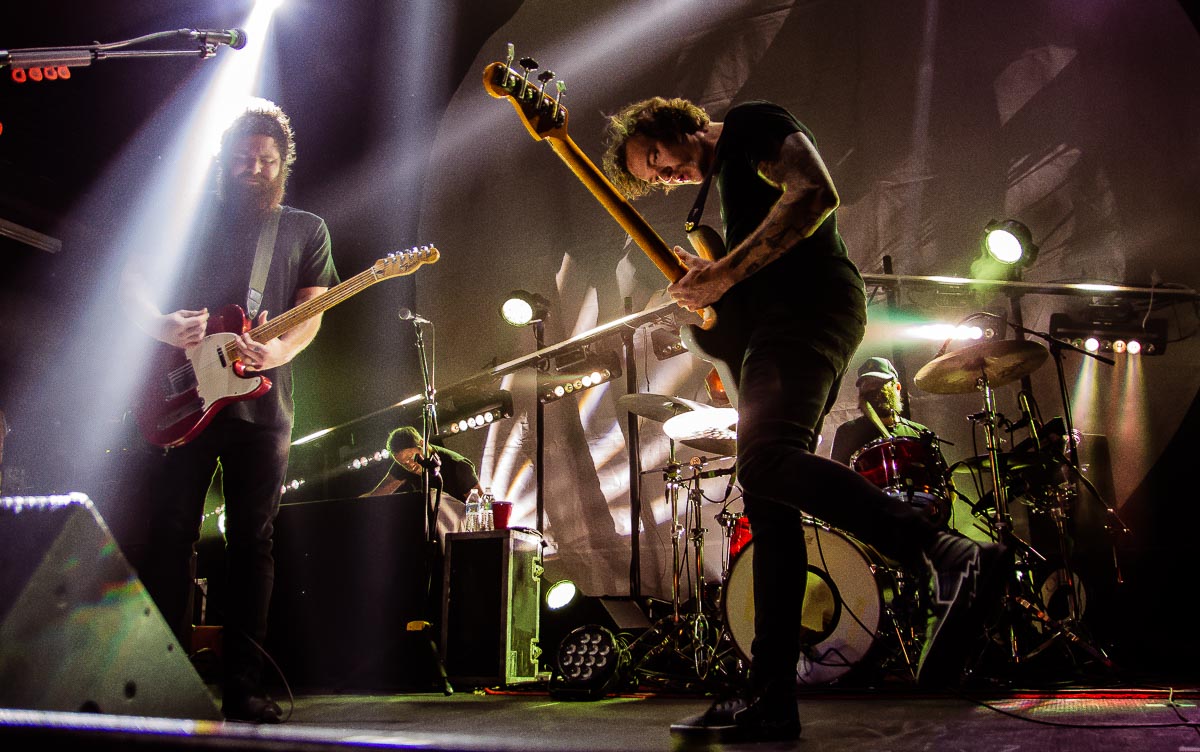 Manchester Orchestra with Foxing and Slothrust

Manchester Orchestra brought their current tour to Louisville, KY on Tuesday night to a sold out crowd of eager fans.  Starting things out this evening was Boston rock band Slothrust.  Having just released their new album Parallel Timeline in September, the band performed songs from the new album, such as “Once More For The Ocean”, that really got the crowd excited and singing along. Singer/guitarist Leah Wellbaum is a really engaging front woman, standing at the front of the stage often throughout the set to play directly to the crowd.  Although a short set, it packed a punch that warmed up the crowd for the evening.  Next up was St. Louis indie rock band Foxing.  These guys were pure energy from start to finish.  Having just released their new album Draw Down the Moon, they played several tracks from the new album this evening, along with some older tracks.  Whether kneeling, laying, or jumping on the stage, singer Conor Murphy was incredibly engaging with the crowd and the band members were all incredibly engaging with each other.  The energy of both the crowd and band were infectious, feeding off of each other throughout the set!  They left the crowd buzzing and more than ready for rest of the show!

Headlining this evening was Atlanta rock band Manchester Orchestra.  Forming in 2004, they have developed a large and loyal fan base, as was evident by the sold out crowd!  They released their new album The Million Masks of God in April of this year and played several tracks from the album this evening, including the wildly popular “Bed Head”, “Inaudible”, which they started the set with, “Dinosaur”, and “Angel of Death”.  The band were full of energy on stage, which fed into the energy of the crowd, with singer/guitarist Andy Hull performing amidst a beautiful kaleidoscope of stage lighting, whether muted tones of blue and red to brighter tones of white and yellow.  The crowd engaged in plenty of sing alongs throughout the set, which added to the fun energy of the show.  The band ended their set with “Telepath” and briefly left the stage, before coming back out to sing two more songs.  Hull thanked everyone for coming out this evening and told them what an amazing crowd they had been before launching into “Shake It Out”.  Ending the set with “100 Dollars” from their 2009 album Mean Everything To Nothing, it was the perfect end to an incredible evening.  Manchester Orchestra is a dynamic live band and left the crowd feeling euphoric long after the music had stopped!