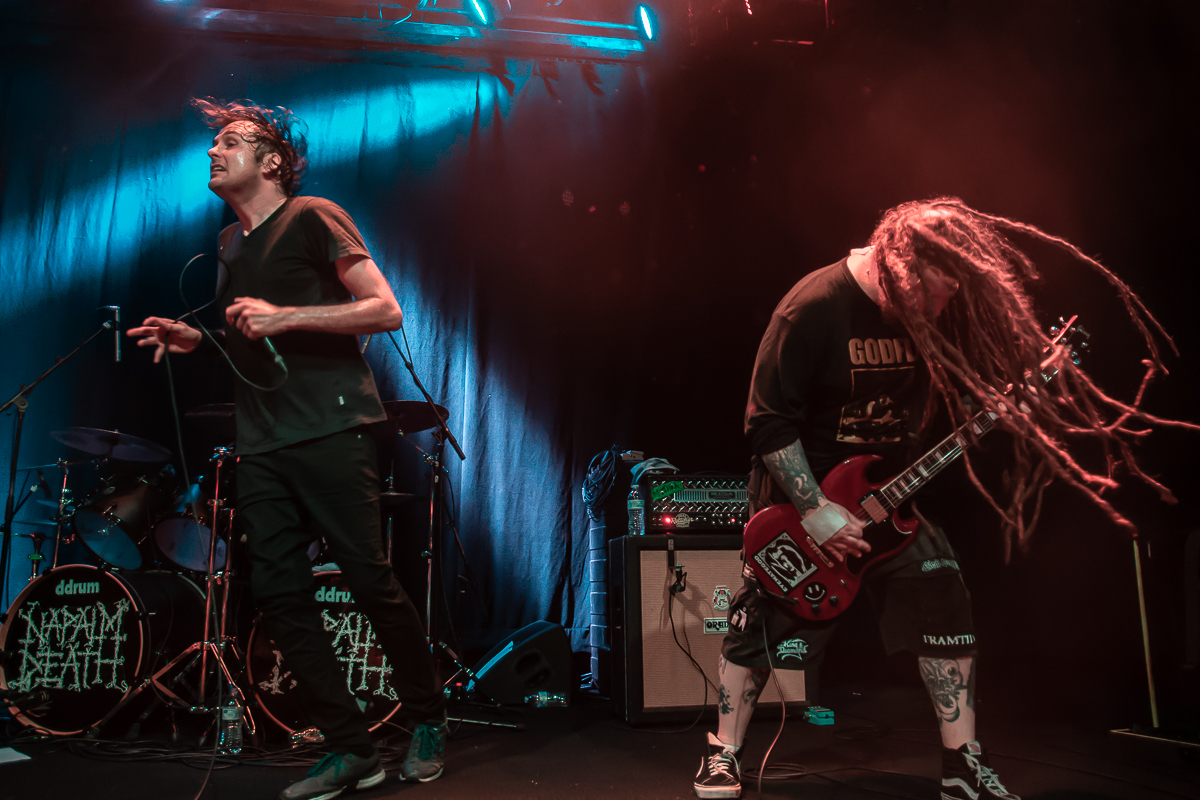 English grindcore band Napalm Death brought their Campaign For Musical Destruction US tour to Louisville on November 8th to a packed venue! Opening the show was Texas death metal band Frozen Soul. With low lighting of dark blues and reds and bursts of white light, they set an ominous mood for their heavy sound!  With a mic stand that looked like a chain, singer Chad Green told the crowd that he wanted to see them go wild throughout the set. Performing songs from their 2019 EP Encased In Ice, as well as their 2021 album Crypt of Ice, they definitely got the crowd engaged and ready for the night ahead. Next up was Los Angeles based grindcore metal band Brujeria, taking it up a notch with a fun and energetic set! With several members being Hispanic and Latino American, the band performs under pseudonyms and portray themselves as being wanted by the FBI, concealing their identities with bandanas around their nose and mouths (with mouth-holes cut out)! Whether they are singing about sex, drugs, politics, or satanism, singers Juan Brujo, El Sangrón, and Pinche Peach sang entirely in Spanish, engaging heavily with the crowd and with each other! With plenty of crowd interaction and engagement, machete wielding, or Pinche Peach holding up a severed head at the end (the band’s mascot Coco Loco), it was a great and high energy set that definitely got the crowd hyped!

Closing out this evening was Napalm Death. Taking the crowd through the band’s various albums, singer Barney Greenway chatted with the crowd throughout the set about the albums and songs and talked political issues such as immigration and abortion rights. With music that was loud and fast, they had the crowd moshing through almost every song, screaming the lyrics with their fists in the air! With a long and vast catalog of albums released throughout their career, including their latest mini album of previously unreleased songs entitled Resentment Is Always Seismic-a final throw of Throes, they played a nice selection of songs this evening that had the crowd banging their heads and screaming along. Barney was constantly moving about the stage and standing right at the edge, singing directly to the fans. At the end of the set he went across the front of the stage fist-bumping fans, a nice way to close the show and appreciate the fans for coming out. This was a really fun night of music and ended up being the show I didn’t even know I needed until I was in the thick of it and having an amazing time! I have no doubt many people are hoping they make a return visit to Louisville in the near future!