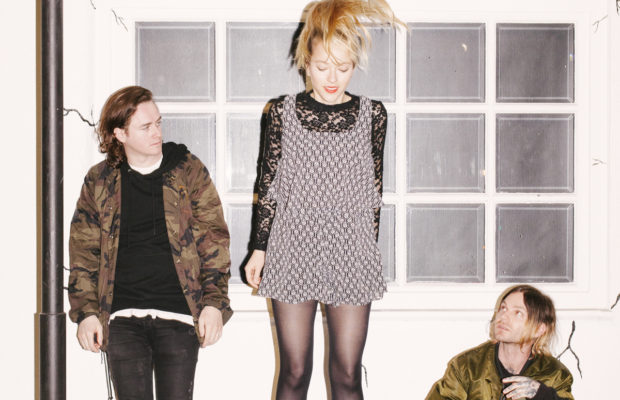 We got to chat with Babs Szabo from LA’s iconic club night, Emo Nite LA, about running a successful club night that’s banking on the nostalgia of the early 2000’s Myspace kids. Along with an incredible club night, Babs and the two other founders of Emo Nite LA, T.J. Petracca and Morgan Freed, run a creative company called Ride or Cry. Ride or Cry handles branding, events and and content editing. They are a multi-talented threesome and we’re very excited to have gotten the chance to pick the brain of one of the founders of this emo empire. Emo Nite La is coming to take over all three floors of Webster Hall in NYC, so we chatted with Babs about the versatility of emo, and what it’s like running a nationally recognised club night

Stitched Sound: Emo night’s having been popping up all over the globe, what sets your Emo night apart from the others?
Babs: We put our everything into these events. It’s really important for us to curate each Emo Nite carefully, from the balloons and intro videos, to the merch and guest artists, everything has to be very cohesive. I think our event is very different from any others.
SS: Even though you guys market yourselves off of being an LA club night, you take your events across the country, what made you decide to do this & are there plans to make your name for universal to match your growing popularity?
Babs: Once we started throwing Emo Nite in LA, we saw people on our socials asking us to come to their city. We decided to take it on the road and see how it goes, and it’s grown to about 20 cities since.
SS: Your events tend to have live performances alongside the stacked guest DJ lineup, what made you realise that drunk Emo fans would be into that as well?
Babs: In LA, we dedicate the Echo (the upstairs part of the Echoplex) to newer bands that we love. It’s been a great way to introduce people to new music, as well as bring bands that they already love into the mix. It adds a really cool element to the event – we have two stages and two patio DJs, people can cruise around all night and experience a variety of things.
SS: Your take over in NYC encompasses all 3 levels of Webster hall, that’s a bold move, can you break down your plan for us on how you plan to utilise each floor?
Babs: It is a bold move! You’re not wrong. We want to bring exactly what we do in LA to NY and allow people who live there to experience it. We’re doing the same sort of deal – bands in one room, DJs in the others, acoustic performances scattered throughout. It’s going to be so much fun. We also got a marching band to play emo and pop punk songs. We’re REALLY excited.
SS: You guys aren’t just a club night, you run a creative company as well, how do you make those coexist so seamlessly?
Babs: The real answer to that is we work non-stop. We’re really passionate about both Emo Nite and our creative company Ride or Cry, so we’re really lucky in that sense. It’s not a burden to work all the time because we love it. There’s also a lot of crossover between the two companies – we’re able to work with clients on the ROC side who will also DJ Emo Nite, for example.
SS: Anything else you’d like our readers to know?
Babs: I’m just really excited to come to NY!
You can purchase tickets by clicking HERE