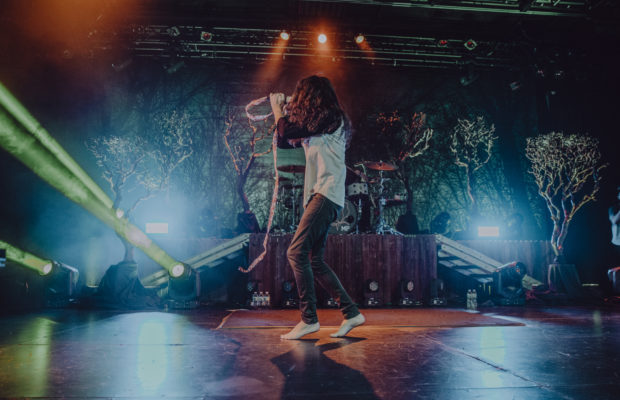 The Welcome To Sunnyland Tour

One of the pop-punk genre’s founding bands, Mayday Parade, released their sixth studio album, titled Sunnyland, this past summer. The album was well received from critics and fans alike, so it’s no wonder that the band is filling up massive venues across North America this fall on their “Welcome to Sunnyland Tour”. On Tuesday night, Times Square’s Playstation Theater was packed to the brim with pop-punk fans waiting to hear a fantastic night of music from Oh, Weatherly, William Ryan Key, This Wild Life and, of course, Mayday Parade. Though the weather outside was dim, cold and quite miserable the energy inside the venue was so opposite that it was like entering an entirely new world.

At 7pm sharp, Texas based band Oh, Weatherly graced the stage. I’ll be the first to admit that I have never listened to this band before Tuesday night’s show, so I didn’t know what to expect. The trope of large pop-punk shows like this, is that the first opening band is usually not so great. But let me tell you one thing, Oh, Weatherly clearly know what they are doing. Their catchy tunes paired with their energetic stage presence led to fans gripping the barricade, reaching for lead vocalist Blake Roses every time he kneeled down to be face to face with his fans. Though the band played a short and sweet 20 minute set, Roses took a moment to thank their fans for coming out and showing up and giving them one of the best nights of the tour thus far. Roses shared a heartfelt story about how he lost his father when he was 17 years old and truly believed he would not be alive to see this day and while the venue erupted in cheers of pride and support for Roses, the band concluded their set.

After the stage was cleared, a single drum kit and acoustic guitar were placed on the stage. William Ryan Key, who you may know from the pop-punk band Yellowcard, took the stage as a solo performer to play songs from his debut EP as well as his forthcoming EP, Virtue. It was very different to see Key in such a calm, acoustic setting but this performance allowed for Key’s vocals to truly shine. Under the beams of four blue lights, Key played emotional ballads that showcased his love affair for New York City, including his song titled “The Bowery”. While many fans in the venue did not know Key’s solo career lyrics, they sure did know their Yellowcard when Key did an acoustic rendition of the band’s hit song “Ocean Avenue”. For that one moment in the show, it felt like it was more of a collaborative effort rather than an artist performing to a crowd of fans. During the chorus, Key let the crowd take over as hundreds of voices joined together in an a capella performance, singing “If I could find you now, things would get better. We could leave this town and run forever”.

The final opening band of the night traveled far and wide from Long Beach, California. “We’re This Wild Life and we’re the pop punk Mumford & Sons” said lead vocalist Kevin Jordan as they took the stage. The acoustic duo framed their performance around their recently released record Petaluma, which they pretended was a prescription medication (complete with a stage prop that was a giant prescription bottle on stage) to help with break ups. The duo played a lengthy set and about halfway through, fully admitted that they make very few love songs — “and even fewer that aren’t about dogs”, Jordan said. Jordan asked for a couple in the crowd to slow dance to their song, “Hold You Here” and the crowd obliged by finding a young couple and creating a circle of space around them as they slow danced to the song. It was an emotional and romantic moment and definitely made that couples night!

The night was almost over but not without a killer performance from the main act. The stage lights were dimmed and the only thing the crowd could see was a backdrop of twinkling lights that were made to look like stars and faux trees that lined the stage. The setup made me feel like I was in a park — peaceful and quiet. However, this was Sunnyland. For one night, all of us collectively traveled to Sunnyland and sang and danced our hearts out. Mayday Parade opened their set with “Never Sure”, before throwing it back to their hit “Jersey”. After two songs, lead vocalist Derek Sanders took a moment to inform everyone in the venue that the setlist included new songs but that there were songs from the early beginning and everything in between. The crowd erupted in cheers and the crowd surfing began as the heat picked up and the excitement took over.

It’s always a pleasure getting to see Mayday Parade — I honestly can’t count how many times I’ve had the pleasure of seeing this band perform, but Tuesday night’s show was hands down my favorite performance of theirs. With every crowd surfer that floated over the barricade, Sanders reached out for a high five or fist bump or the occasional microphone share so that the fan could sing along with the band. Judging from the setlist, it’s clear to see that Mayday Parade pays close attention to the energy of their crowd because just as things began to slip below 150%, the band erupted into a cover montage of some of the early 2000’s best songs including My Chemical Romance’s “I’m Not Okay (I Promise)” and Taking Back Sunday’s “Cute Without The E (Cut from the Team)”.

The night was coming to an end, but not before Mayday closed their set with “Oh Well, Oh Well” and the crowd showed they had one final hoorah. Crowd surfers were flowing, fans were dancing and singing their hearts out. It was an amazing opportunity to watch both the older and newer generations of Mayday Parade fans come together for a night of good fun and good music. The Sunnyland Tour was one of the best nights I’ve had at a concert in recent memory.