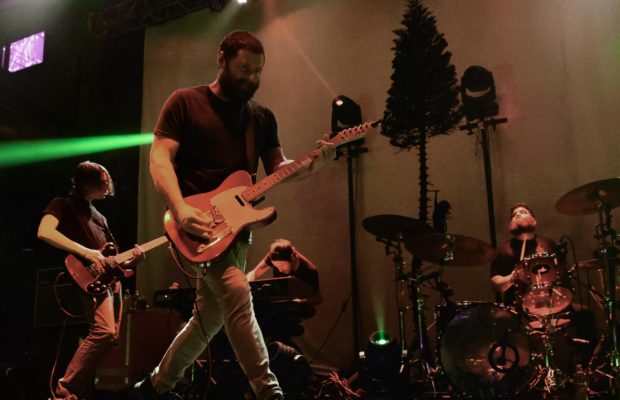 Atlanta indie rock band Manchester Orchestra recently brought their A Black Mile To The Surface Tour to Louisville, KY.  Touring in support of their latest album by the same name, the band performed to a nearly sold out crowd of excited fans who were ready to to have a good time.  As they took the stage to a roar of cheers and applause, the band started their set off with “The Maze”.  Continuing to perform a variety of songs including “Shake It Out”, “I’ve Got Friends”, “I Can Barely Breathe” and “Cope”, the crowd sang and danced along to every song.  The band made full use of the stage, interacting often with each other and with the crowd.  Singer/guitarist Andy Hull didn’t speak much throughout the night, with the band instead wowing the crowd with their dynamic performance!  Ending their set with the song “The River”, the band exited the stage only to return moments later for a two song encore.  Starting their encore with “The Gold” they finished the evening with “The Silence”.  Manchester Orchestra gave their fans a fun and energetic evening!  Kevine Devine and (Sandy) Alex G opened the show.