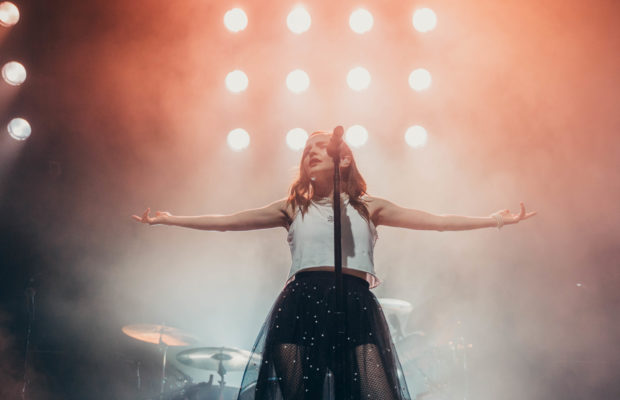 The city of Denver gathered for the second night in a row to welcome Pale Waves and Chvrches.  Just as the English Indie pop band was about to take the stage and open up the night, the power went out. Fans waited for what seemed like an eternity before a loud announcement echoed throughout the theater. The big voice warned that Pale Waves was cut from the set due to time restriction. The disappointment didn’t last long once the Glasgow Natives-Chvrches took the stage.

They opened their set with their popular hit “Get Out” and their lyrics echoed throughout the Entire theater. Not one person stood still while the enticing lights and Synth waves caused bodies to involuntarily move and sway. They continued directly into their Song “Gun” as Singer -Laura Mayberry Strut across the stage with the utmost confidence. Fans gleamed in awe at the bands performance and for the best reason. Despite the extreme delay and hiccup in the beginning of the night, Chvrches made the wait 100% worth it.