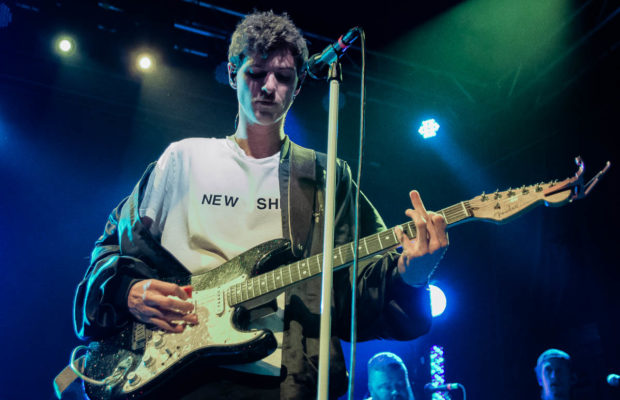 Louisville, KY is buzzing with energy every year leading up to Forecastle Festival, with this year being no exception.  On July 12th, the Thursday leading up to the festival, Headliners Music Hall in Louisville, Ky played host to Houndmouth-Waiting For The Night: A Charity Show, which saw 100% of ticket sales being split amongst 3 different charities.  The band has a large hometown fan base, many of whom came out this evening for a fun night of music from one of their favorite hometown bands.  Starting the set off with their hit song “Penitentiary”, the band performed plenty of classics, as well as some songs from their upcoming new album Golden Age, including “This Party” and “Golden Age”.  Although the band has always been labeled as Americana, the new material has a more upbeat and electronic sound, with the addition of a horn section, making you want to dance!  The crowd was dancing and having a great time and seemed to love the new sound!  Towards the end of the set, it was announced that it was bass player Zak Appleby’s birthday, at which time a cake with candles was brought out.  The crowd sang happy birthday to him and he was in high spirits as he blew out the candles, with the cake then being taken away to be enjoyed after the show.  Ending the set with “My Cousin Greg”, the band left the stage to a roar of applause and cheers.  Local DJ Sam Sneed opened the show.