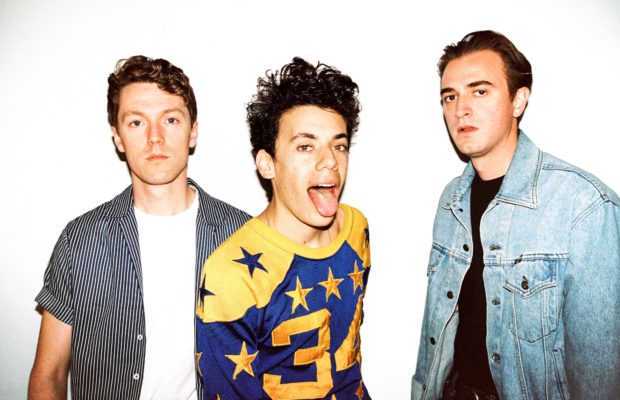 New York City post-punk/pop band Mainland, fresh off of tour supporting The Mowgli’s, is currently on their first headlining tour, having recently released their latest EP entitled Villians.  Comprised of Jordan Topf (vocals, guitar), Corey Mullee (guitar, keyboard) and Alex Pitta (bass), the members all came to NYC from California to pursue college but ended up meeting and forming Mainland instead.  The band formed in 2011 and released their debut EP, Girls Unknown, in 2013, creating a buzz and wowing audiences since then.  They have toured with bands such as Mariana’s Trench, Jukebox The Ghost and Melanie Martinez, steadily building their fan base over the years.  The band signed with 300 Entertainment in 2014, announcing a change in musical direction soon after, moving from a grungy, angsty sound to a more pop-oriented rock and roll sound.  The band moved back to California to record Villians, which was released on April 27th, and mixes the light with the dark, with sometimes morose and gritty lyrics packaged within an upbeat melody.  Our staff writer, Emily May, recently chatted with lead singer Jordan Topf via email about their new EP, their video for “I Found God” and their first headlining tour.  You can stay up-to-date with the band and find upcoming dates on their current tour on their website here.   You can also find them on Facebook here, Twitter here and Instagram here.  You can stream their music on Spotify here and Soundcloud here.  You can purchase the new album here.  Check out their video for “I Found God” Below.  Photo credit:  Phoenix Johnson

Your new EP, Villians, was released on April 27th. What can you tell me about the inspiration behind the album?

We want people to interpret villains in any way shape or form that they relate to. If I had to pinpoint a common thread in this set of songs I’d say they conceptually revolve around the push and pull of a relationship.

You guys originally moved to NY from California, which is how you met and formed Mainland. I read that you decided to go back to California to write and record the new album. What prompted that decision? Do you feel that California inspired you in ways that NY could not?

We felt like a change was in order and would inspire a new breath of creativity for the band. California has a lot of open space to clear the mind and spark ideas. Also we’d met our producer Colin Brittain out there, who we collaborated on these recordings and that facilitated us working on the record there.

What can you tell me about the video for “I Found God”? What was the inspiration behind the video? How did you guys meet Dani Girdwood and Charlotte Fassler from Similar But Different and come to collaborate with them on the video?

Dani and Charlotte are very close friends who expressed interest in doing our video and we love where they were coming from with it. We wanted to portray the way we see love in the modern world and how that feeling is spiritual and transcends all boundaries. We shot the video in the countryside outside of New York City and love how it all came together with the idea of using real life couples.

I saw a post on your Instagram page regarding the writing and recording of “I Found God”. You said “I don’t think we (Mainland) have ever put out a song so inherently us before. It’s an evolution of what we’ve always been but at the same time completely new territory”. Could you talk about that a bit?

We aim to have a message in our music, and it usually comes out sounding hopeful and optimistic. With songs we’ve released in the past like “Beggars” or “A Bit Out of Time” we used imagery of hope to encompass a larger than life feeling in the songs. IFG can be interpreted in a lot of ways, but in short it pushed our boundaries a lot to use the word god in a song and to be singing about love in larger than life experiential terms.

Your single “Hometown” deals with the darker theme of being surrounded by drug addiction and the quest to escape that environment. What was it like for you growing up in that environment in Santa Cruz and seeing so many friends fall victim to drugs? How did you manage to escape that fate and find the light at the end of the tunnel?

I had music to guide my path luckily. It provided me with an outlet to escape from the inevitable. Friends were always playing in bands and making art and that was the best you could do in my town. My youth wasn’t all bad there just happened to be moments of darkness and helplessness from people around me. Many battling their demons and turning to drugs to numb the boredom and sadness of living in this bubble. Santa Cruz is paradise, but paradise can be a double edged sword.

I read that there tends to be a sense of longing and nostalgia in your music. What is it that draws you to those themes?

They come naturally to me. I’ve always lived in the moment since I was a teenager and never looked back at my decisions – just always moved forward. Looking back in time always feels romantic to me in writing, a dream state to explore in your past. Because when things happen to me it’s the moment of stepping away and reflecting on these events that makes me feel the most human.

You guys have posted several #loveontour videos to your Facebook and Instagram pages. What was the idea behind these videos? How did you choose the participants?

We asked people we met on the streets, people that seemed open to our questions. Every day we were attempting to learn something about these peoples love stories and it was fascinating the archetypes we came to discover. Love is a topic people would open up about so quickly if it were the right person and setting. Love is the message behind IFG and we wanted to showcase the world and how we see it with #loveontour.

You guys recently finished a tour with The Mowgli’s and are on your first ever Headlining tour with KITTEN, Wildling and Rad Horror! How does it feel to be doing a headlining tour and have you noticed any differences in how you are preparing for this tour, as opposed to doing a tour as a support act? I also saw that you made a Villians Tour playlist on Spotify. Do you usually make playlists before you go on a tour?

Headlining has been our favorite so far. New York was just about sold out and cities like LA, Dallas, Pittsburgh, and Baltimore were very big for us. With no album out we didn’t know what to expect with this tour but it’s been a complete success and we’ve been able to play almost our entire catalog of songs. We’ve never played such a long set before so getting a hang of that took a few shows then we were coasting. We experienced some fans coming to 10 different shows and traveling with the band-that was a first! We love our support for this tour Kitten, Wildling, and Rad Horror. The playlist is so our fans can get familiar with their music and enjoy what we’ve been listening to on the road.

It began out of necessity and where I’m from. Santa Cruz has some incredible vintage and it just was what I could afford in high school. It became apart of our band’s style. We’ve always worn vintage as a band because we like the way the clothes feel and that one of a kind feel. The vintage store is something I’d like to do further down the line in the form of a physical store. It’s always been a dream of mine.

Aside from the upcoming tour, what’s next for you guys?

We just released our new EP Villains. This summer we’ll be playing festivals (Riverfest, Kerfuffle, and Lollapalooza) all of which we are stoked to be apart of. Fall touring and new music is the next phase.