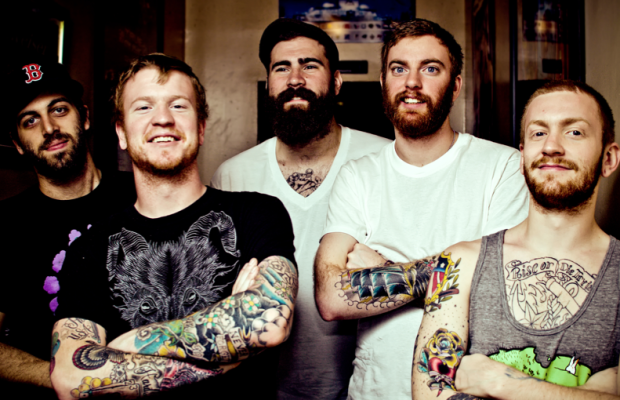 At what point in your life were you positive that you wanted to make music?
I’ve always been positive that I would be playing music. I never knew I’d be able to play music and tour full time for a living, even if it is a bit of a meager one. I could not be more happy with how my life has turned out thus far!

What was the most fun tour you’ve ever done?
Definitely can’t answer this question exactly, but I will say this; there have only ever been one or two tours that weren’t that much of a blast. We usually get along with the other bands really well, and as long as everyone gets along tour is a lot of fun.

What is the longest band-name you’ve ever heard of?
Coke-dick-motorcycle-awesome is pretty righteous.

What bands/musicians have inspired you?
I think it’s more of the types of music that inspire us. Going to hardcore shows and punk shows growing up, we always had this mixing pot of different styles of music and that shaped what we’ve become more than anything else.

What is your biggest pet-peeve on tour?
Either when I finish a book and have nothing to read or crossing borders and not being able to have weed.

Do you believe that you received positive feedback from your fans about your most recent album, Enemy Of The World?
I’d like to think so, we went into it knowing that not everyone would like it, so we were ready for the criticism. For the most part though I’m really happy with how people got into it.

What is the craziest thing a fan has ever done to get your attention?
I wish I had a funny answer to this! Honestly, for the most part we just always hang around the venue after we play so usually the craziest thing anyone has to do is say “Hey guys” and then we all hang out. We are a pretty approachable band.