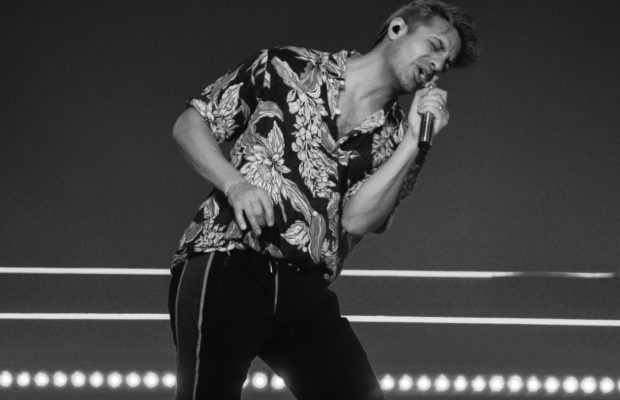 Young The Giant with Lights

California indie pop band Young The Giant spent Halloween in Louisville, KY this year and asked fans to come dressed in their favorite Netflix themed costume.  The band, who just released their latest album Mirror Master, performed to a packed venue of fans, many of whom did indeed arrive in costume. The theme of the evening was Netflix and Kill, with the members of Young The Giant dressing up as the fab 5 from Queer Eye.  As the band took the stage, singer Sameer Gadhia thanked those who came out in costume, as well as those who just put on regular clothes to there that night.  He is a dynamic frontman, moving about the stage and interacting with the fans during the entire set, often times grabbing and shaking the hands of those in the front row at the stage.   Starting the set off with “Mirror Master”, the band performed a nice mix of new songs and older hits, including “Heat Of The Summer”, “Titus Was Born”, “Something To Believe In”, “Nothing’s Over” and their early hit “Cough Syrup”, which drew a lot of cheers from the crowd.  A few songs into the set, Gadhia mentioned how the band has an online series called In The Open on which they play acoustic versions of their songs with stripped back production.  They then performed “Strings” and “Firelight” acoustically.  He went on to say that a song is only worth its weight if it can be played on an acoustic guitar.   He later told the crowd that the band is often asked what they think about when writing songs but that the only thing that matters is the meaning that the fans give them, that the fans are the only reason why the band is here.  Ending their set with “Call Me Back” from the new album, the band left the stage only to come back out for an encore, performing an encore.  During the first song, Gadhia took a fan’s cellphone from the front row and recorded himself for a few seconds before handing it back.  During the final song, the band brought out Lights, who is currently touring as support for Young The Giant, creating a giant party on stage. Young The Giant always puts on an incredible show with this evening being no exception.  It was a really fun show and a great way to spend Halloween!