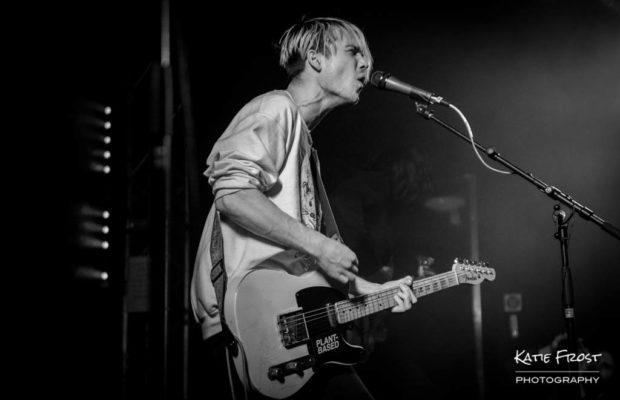 Last Monday I headed to The Dome in North London to see Los Angeles rock band Badflower play a cracking headline show to a packed room of people.

Support came from London duo Tokyo Taboo who, together with their live drummer and bassist, put on a full-throttle performance that went down well with the eager crowd. Their music is in-your-face pop punk / rock and their live show featured a pole performance by vocalist Dolly Daggerz which I certainly wasn’t expecting from a music show, but was really incredible to see how she not only walked on those insane heels, but also sang whilst performing on the pole. She also didn’t restrict herself to the stage, venturing down into the crowd on a couple of occasions to interact directly with the fans (if they weren’t fans at the start they certainly were by the end!).

For me one of the best moments was seeing almost the entire room of people sitting on the floor with Dolly as she belted out songs right up in their faces, and they loved it. The other half of the duo – guitarist Mike – was also very animated and put 100% into his performance, as did their friends on bass and drums. A really great live act that I would definitely go and see again.

At around 9:30pm headliners Badflower took to the stage to a huge roar from the excited fans. I first saw Badflower when they supported Aussie pop duo The Veronicas on their 2015 UK tour. I was impressed with their energy and stage presence back then but they have upped their game in the last four years and wow – what a show! Vocalist Josh was charming and engaging, and the whole band were full of energy and a pure joy to watch. This show clearly meant a lot to them and they were feeding of the love and energy of the crowd.

The band released their debut album Ok, I’m Sick on 22 February and played tracks from the record as part of their set, including “Die” and “Heroin”. They also played some of their older material including “Soap” and “Animal”. Badflower are a fantastic live band who put their heart and soul into their performance. I highly recommend that you go check them out if they play a city near you.