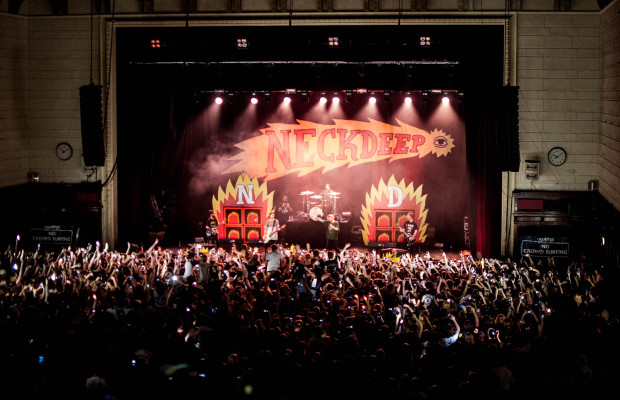 Check out the full gallery of photos from the night here.

There might not be a ton to do in the English seaport town of Southampton, but on the night of Neck Deep’s show with WSTR and Creeper, it was evident that a large population of the city are pop punk fans.

With people lining up early in the day, lines zigzagging around the venue long before doors opened, fans came out for the sold out show dressed in their pop punk best, many wearing merch in support of their hometown heroes, Creeper.

Hailing from Liverpool, WSTR (No Sleep Records) opened up the show to the eager fans who had been waiting in line in the frigid cold all day. Performing classic pop punk songs with their very own WSTR edge, their closing song “South Drive” received the loudest response, many in the crowd singing along. Their set was able to wake up everyone in the venue and get them ready for the remaining acts on the bill.

For Creeper (Roadrunner Records), this show was very special for them. With family members scattered throughout the venue and a large majority of the audience wearing some form of Creeper cult merch, the six piece band received a very warm welcome as they began their set in their hometown.

Throughout their entire eight song performance, none of the members onstage seemed to miss a beat. Singer Will Gould is one of the most captivating singers in this particular music genre, his Freddie Mercury-esque stage presence and powerful vocals that never faltered captivated every single person in the room that night.

“Black Mass”, the second song in their set, was one of their best performances, as well as an overall crowd favorite. With voices singing along throughout the venue, it was evidently clear that the members in Creeper enjoy performing this song as much as their fans love hearing it, each musician giving it their all during the two-minute song.

Closing their set on a more difficult note with “Henley’s Ghost”, the band dedicated the song to a close friend of theirs who had recently passed away. The theatrical tune gave the members of Creeper the opportunity to honor their friend while those in the audience all joined together, singing along and waving their hands in the air.

Starting a little after nine, the red velvet curtain opened up and the members of Neck Deep took the stage for another night on their world tour. As the last leg of their world tour, a run they called “Homecoming”, it became very clear that their performance was just that – a homecoming.

After traveling all around the world and performing to so many different crowds over the past few months, Neck Deep was happy to be back in the UK, lead singer Ben Barlow taking a moment out of the set to declare that.

Opening up their set with “Citizens of Earth”, the opening track of their newest album, Life’s Not Out To Get You, it couldn’t even be brought into question as to why Neck Deep is considered one of the best live pop punk bands in the scene today.

Jumping up and down on raised platforms throughout the entire set, guitarists Sam Bowden and Matt West were able to interact with all of their enthusiastic fans in the crowd, helping to command everyone in the room with lead singer Ben Barlow and keep energy levels high for their fourteen song set.

“Kali Ma”, one of the latest singles off Life’s Not Out To Get You, was a highlight of the night – the crowd breaking out into cheers and shaking the entire venue as the song kicked in and everyone began jumping in sync with the members onstage.

Before jumping into “What Did You Expect?”, the first song Neck Deep ever wrote and released, the members took some time to share that the third show they ever played was in Southampton and that they never expected to be playing the venues they have over this past year.

Humbly thanking everyone in the crowd for their support over the years, the grounded and personable nature of those in Neck Deep is a main reason why so many people are attracted to their music and care about the band as both performers and people.

As could be seen during their performance, whether they were creating their own circle pit onstage or simply looking at one another and smiling when the crowd reached a certain level of loudness, the members in Neck Deep don’t try to present themselves as anything, but a band that just loves to play music and is incredibly thankful for all that has happened for them.

The performance of “A Part of Me”, one of their most popular tracks that has nearly 4.8 million views on YouTube, will be a moment that fans will not forget from the night. Lighting up the O2 Guildhall with the lights from their phones, lead singer Ben Barlow allowed the audience to command the performance, many in the crowd sitting on the shoulders of their friends and singing the song right back to the band.

Closing the night with “Can’t Kick Up The Roots”, a track that stands as a reminder that no matter where you are, your hometown will always have a piece of you, Neck Deep walked off the stage, ticking another night of their world tour off their list.

71 shows, 15 countries, 4 months, 53,325 tickets sold, 53,000 miles traveled and the Neck Deep world tour officially came to an end a few days after their show in Southampton.

After some much needed time off this summer, I am sure it won’t be long before Neck Deep sets out to conquer the world once more.