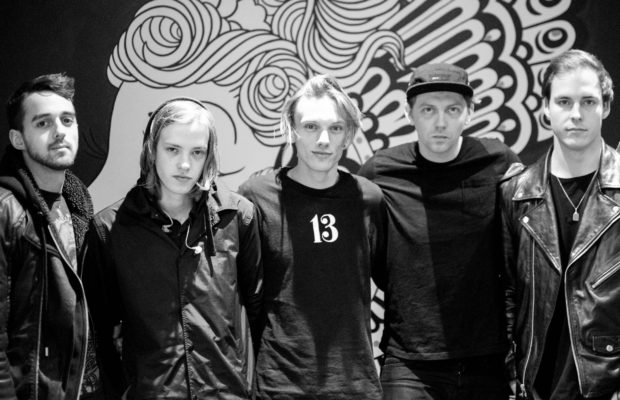 Right before they took the stage in London for the final show of their UK tour, the members of Counterfeit all crammed together on a sofa to talk about who and what inspired them to pursue a career in music.

Roland Johnson: Mine was my dad blasting Led Zeppelin quite a lot. I remember this one specific point where he put on one of their live DVDs and Jimmy Page came out playing the double neck guitar and was just killing it. That was the point where I asked for a guitar for Christmas when I was about nine and it’s been on since then.

Tristan Marmont: This might be quite dad themed, but my dad got me into guitar as well. I would always watch him play and wanted to do it myself. He always used to play people like Jimi Hendrix and Led Zeppelin and stuff like that and that was my entry point really.

Sam Bower: Mine was slightly mixed. It was being in the car and just constantly having different things on and it was also seeing what music would do to people in the live circumstance. I was put into quite an intense choir when I was young and just seeing what certain music did to people was something I found really interesting. It was fascinating in the way that it impacted people and that made me want to push it and play with it a little bit.

Jamie Bower: I had really no option other than performance in some way, shape or form. Sam and I were born into music in a weird way, our parents both worked in the industry and part of life was just going to shows. I went to a Guns N’ Roses show when I was two and that was just how life was for me. I used to go to Michael Jackson all the time and by the time I was ten, I had to have gone to hundreds of gigs sitting on my mom’s shoulders with ear defenders on. It was in my blood. I had an air guitar band with one of my mates when we were kids and it just all sort of made sense to be a performer in some way. I did try my hand at normal life, I did. And I was really crap at normal life. I wanted to be a marine biologist for a bit, but unfortunately growing up in the United Kingdom, if you want to be a marine biologist, it’s very unlikely that you are going to swim with dolphins. You are, instead, going to study flatworms in Southampton. Also, I was shit at biology so I figured I would do this instead.

Jimmy Craig: I was about ten and my dad told me to pick an instrument so I picked drums because they were noisy and it looked fun. I joined this like Ramonesy-punk band when I was thirteen and the guys were quite a bit older than me. We did a show in a pub and since then, I just loved watching people go fucking nuts and love the music, I was hooked on playing every since then. There was no other option after that, I had to make it happen. And just seeing shows as you grow up, like going to big arena shows and things like that and watching these bands having a great time, I just knew that was it for me.