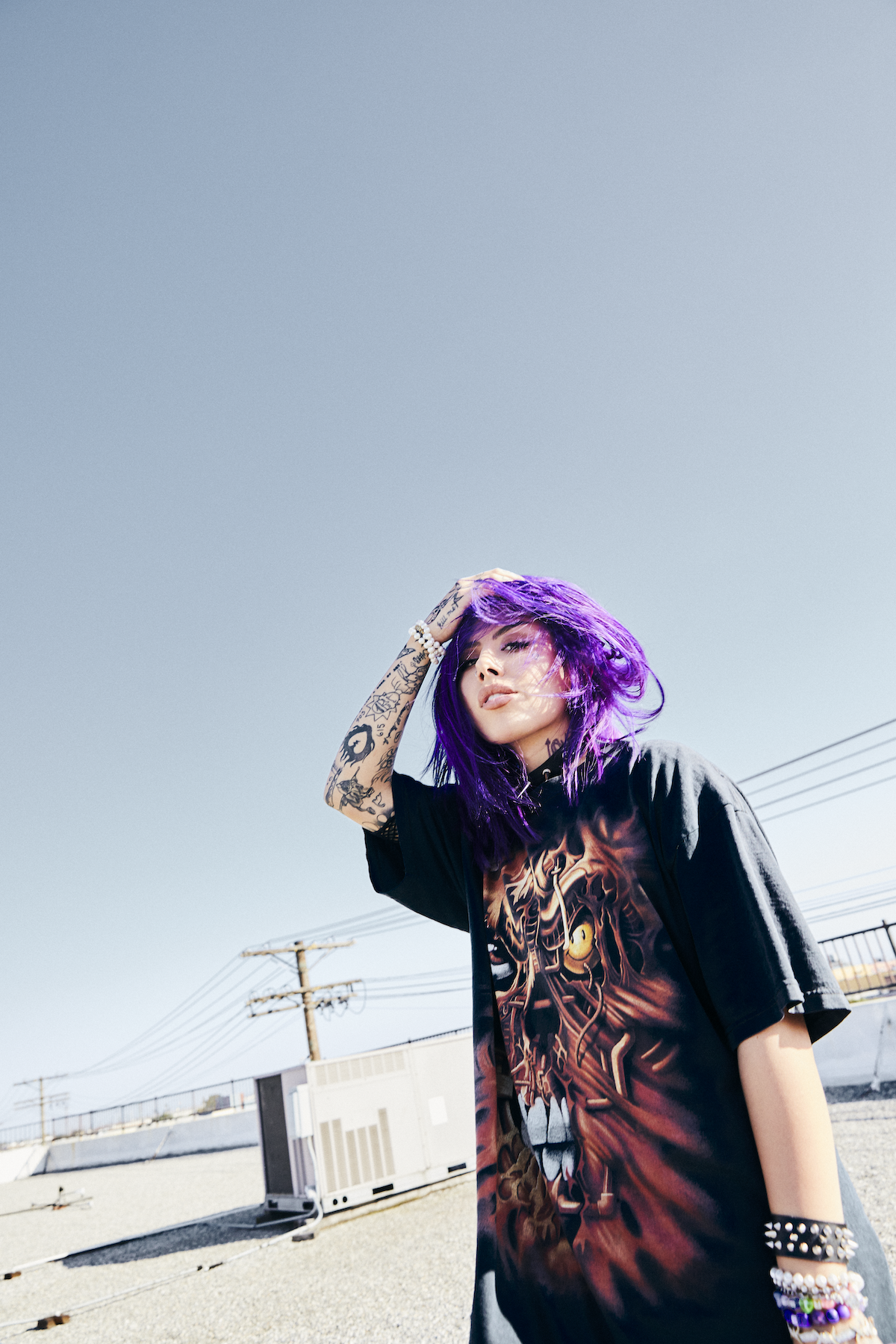 Born and raised in a small border town between Texas and Arkansas, LA-based Mexican-American musician, singer-songwriter, record producer, engineer, music video director, and visual artist KILLBOY knew from a young age that she wanted to pursue music.  Her music is a blend of different styles and genres including, but not limited to, melodic anti-pop, hip-hop, funk, electro, evil pop, alternative and punk.  In high school, she made YouTube videos, toured, recorded, and was on the radio under her legal name.  Having later attended college, she packed up everything she owned into her car before her final semester and headed to LA to pursue her music.  Quickly learning that she did not want to have to depend on anyone else to record, produce, and engineer her music, she taught herself how to do everything on her own via tutorials on YouTube.  She initially received recognition for her breakout single, the bedroom produced “WHEREDAFUCC”, in December of 2019 and has since released a string of singles including “HIGH ON MY OWN SUPPLY”, “JUST ME”, “666”,  and “THAT’S OK I’LL JUST FUCK MYSELF”.   2021 has seen the release of “U + ME”, “CORY WIT THA GF”, “I FUCK EVERYTHING UP”, and “FUCK YO FRIENDS”.  Today sees the release of her latest single “SPACE”, which she wrote and produced, that “breaks down what all toxic girls actually mean when they say, ‘I just need some space.’”  Make sure to follow and connect with KILLBOY via the following links.  Photo credit; Jimmy Fontaine.

You grew up in a small town between Arkansas and Texas, and in high school you made YouTube videos and toured, recorded, and got on the radio under your legal name. What can you tell me about finding your love for music as a child and having those experiences in high school? What do you feel you learned about music and songwriting during that time?

I have always loved singing and making up songs. In high school, YouTube was competitive to get views & grow, so I had to learn how to make things sound loud & crispy to compete with the quality of everyone else’s professionally produced videos. I had no clue what I was doing but I know that definitely helped me grow & learn more about equipment and producing. As far as writing, I feel like as soon as I stopped trying to be cool and just started writing songs to give to people that’s when people started connecting & so that shaped how I write.

What led you to move Nashville and decide to go to college and what made you decide that college wasn’t for you?

I got a publishing deal offer but I secretly just wanted to get out of my parents’ house, so I moved away. I wasn’t feeling the industry shit so I ended up just fucking off & partying. Then I was so broke and I needed money to live, so I decided to get student loans. I felt really anxious and like I was going against my own current doing things other than music – So I came back.

During your last semester of college, you packed your stuff into your car and drove 24 hours to LA to work on your music. What were those early days in LA like for you? Having come from a conservative family who wanted you to be a certain way, in what ways did moving to LA help you to figure out who you are and what you want your life to look like? What have you learned about yourself?

It was funny. I thought I was moving into a nice clean big house “central to EVERYTHING”, but it was actually a fourplex stranded in Koreatown with no AC, 3 dogs that piss and poop everywhere, a fat roach problem, and the windows didn’t shut. I liked it though. My roommates and neighbors were chill and didn’t care how loud I blasted my music at any time of the night. I started making dope shit and dying my hair and getting tattoos, but I was scared of my family or exes or friends finding out so I became Killboy. Mostly I learned that I can get myself through anything.

Upon moving to LA, you learned how to do everything, with regards to making your music, so that you did not have to depend on anyone else. What was that process like for you, teaching yourself everything by watching YouTube editorials?

Figuring out technical things has never been my problem. It’s fun for me. I love figuring out new ways to create. I just wish there was a YouTube tutorial on how to be a consistent person who likes social media. I’m just not that. I want to release music and tour.

You also had the opportunity to attend a Pitbull writing camp in Miami, where you met producers such as Supa Dups and Ben Billion$ and had the chance to write with Theron! What was that experience like for you and what did you learn from it?

I was nervous to be around them, so I mostly just watched how they worked. Theron was playing games on his phone while writing. Danga doesn’t go a day without his workout routine and is adamant about incorporating real instruments rather than samples. Supa Dups and Ben are really nice, humble, confident, quiet dudes that just let the music speak. I worked with them like the first week I was signed and I still try my best to incorporate those traits into my own life. Playing FortNite while writing is kind of a cheat code, by the way.

You released your debut single “WHEREDAFUCC” in December of 2019. How do you feel your music has evolved over the past couple of years with your newer songs?

The songs you’re hearing now I wrote almost a year ago too, lol. I wrote “SPACE” 2 years ago. I think mostly I’ve been in a very emotional and angry and anxious period the past year, so the music has been fire-fueled and less chill cool girl.

You have talked about how when writing music in the past, that you never thought about the art/visuals for your songs and that other people used to do it for you and you usually hated it. When did you decide to start creating your own art/visuals and what does that process look like for you? How would you describe your aesthetic?

I just like being creative. It seemed like it would be overwhelming, but when you work with creative people who are down to help figure out how to make it happen, it’s fun. My aesthetic, haha, I don’t know – I like stars and hearts and pink, blue, purple and lime green a lot.

What do you like to do for fun outside of music and what does self-care look like for you?

I like to get completely out of LA, away from everybody and go do stuff outside, skateboard, play FortNite. Self-care is being alone, practicing instruments, eating healthy food, lifting weights, calling my mom, going outside, and hanging out with my cats.

Releasing all this music! I released “I FUCK EVERYTHING UP” earlier this month and “SPACE” is up next.