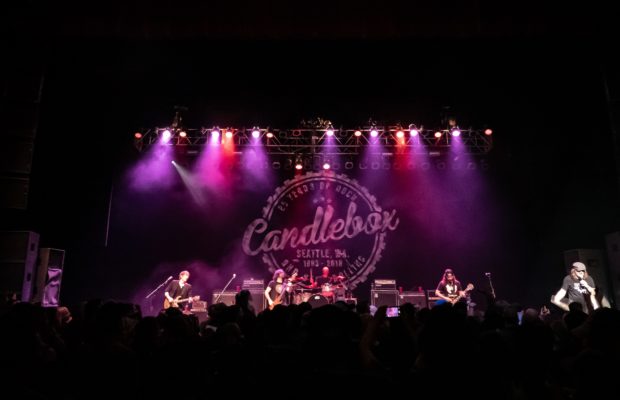 It has been 25 years since Candlebox released their self-titled debut album in 1993 and it has since gone platinum four times in the United States. The band decided to go out on tour to celebrate the album turning 25 this year and fans all over the country can barely contain their excitement to hear the album live in its entirety.

I was lucky enough to see two of those shows last weekend. Saturday night they played at the beautiful Fillmore in Detroit, MI and Sunday to a packed house at the Hard Rock Rocksino in Northfield Park, OH.

Opening up in Detroit were The Lows and To Whom It May Concern. Both bands put in a very solid set and the crowd seemed to really enjoy their performances.

When the lights went off for the third time this evening, a very excited audience started cheering and clapping while the band came on stage.

First off, Kevin Martin apologized that he is “sick as fuck”, but promised he’d try his best to perform. And let me tell you, a sick Kevin Martin still puts on a better show than most musicians even when they are at 110%.

As promised they played Candlebox in its entirety but also threw in a few rarities like 10,000 Horses, which Kevin only played because their sound guy loves it. I overheard a few fans in the audience who seem to agree with said sound guy and were thrilled to hear it.

After a very solid 100 minute set the band left the stage leaving everyone in the room wanting more. While exiting the venue, I overheard some fans saying they were going to make the trip to Ohio for the show the next day, as they can not get enough.

Sunday night at the Rocksino was almost sold out. The night started with technical difficulties for opener To Whom It May, which cut their set significantly shorter. Luckily the crew was able to get everything in working order when it was time for Candlebox to hit the stage.

Just like the night before, Kevin apologized for being sick but nevertheless gave it his all. The rest of the band was in top form and put on a performance no one is going to forget about anytime soon.

Of course, they still played Candlebox in its entirety, but much to my enjoyment they changed the setlist up for most of the other songs.

Throughout the show, the band interacted with the crowd, took selfies with fans in the front row and Kevin even jumped off stage to give high-fives while making his way through the audience. What an amazing way to finish off this leg of the tour. There will be a few more shows coming up this spring, before the band heads over to the UK. Make sure to catch them when they are in your area.