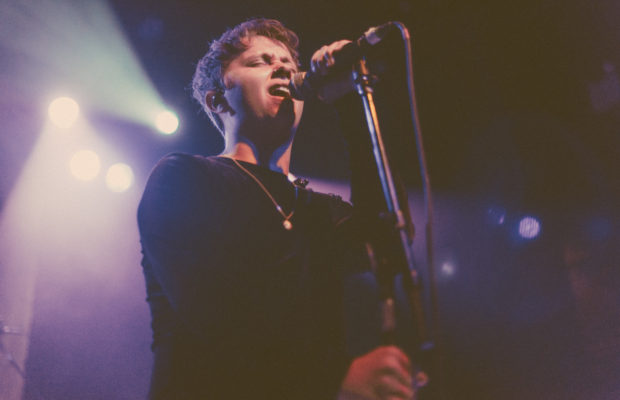 Irving Plaza is buzzing when I arrive to the Union Square venue. The stage is getting setup for July Talk‘s set and the crowd is eagerly anticipating their arrival on stage. The band take the stage and right off the bat their energy is electrifying. Front-man Peter Dreimanis and front-woman Leah Fay‘s chemistry is intense, they feed off each other’s energy as well as the crowd’s throughout their set. During ‘Beck & Call’ Fay is handed a bra from a girl in the crowd, she then wraps it around Dreimanis‘ neck and drags him around the stage by it. The whole rest of their set follows suit. Essex boys, Nothing But Thieves, are up next, and I’m just as pumped for their set as the rest of the people in the venue are. These guys have been a personal favourite of mine for awhile now, and this is my first time seeing them live. The band takes the stage and the crowd starts to cheer, singer Connor Mason steps up to the mic, clad in a velvet long sleeved shirt, and they jump straight into their song ‘Itch’. Mason‘s voice fills up the room, and sounds even more impressive live than it does recorded. The set is filled with some of my personal favourites; a great mix of singles and fan favourites off their record. The highlight of the evening for me, was when they played ‘Trip Switch’ which is one of my all time favourite songs. Hearing it live was just as amazing as I thought it would be, the band is enjoying themselves, and the crowd are enjoying themselves. While Mason doesn’t address the crowd very much throughout the night, when he does he talks about how playing in NYC is always so amazing, and how thankful he is to be here, playing for us. When Nothing But Thieves leave the stage, all I want is for the whole night to start again. Between July Talk‘s sexually charged set and Nothing But Thieves amazing energy, this is one of the most interesting and fun shows I’ve been to in quite some time.