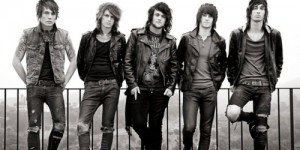 Asking Alexandria shared the news this week that vocalist Denis Stoff is no longer in the band and Danny Worsnop has resumed his role as vocalist. The lengthy post from the band can be read below.

“Basically, to a cut a long story short, we didn’t kick Denis out of the band. He just stopped talking to us. As most you know the Asking boys went out around the UK and Europe, doing a bunch of headline shows and a bunch of festival appearances—I had to miss that tour due the birth of my daughter—which was really upsetting. But obviously I kept in touch with the guys, every single we day we kept in touch… Everything was great, everything was fine. So that was that.

Denis went back to the Ukraine, we all came back to the states, we all had a nice little break. It got to the time where we started trying to organize a video shoot for “Send Me Home“, we’re like ‘Denis needs to fly back to the states, we’re going to do a video for “Send Me Home“, start work on new songs, new music ‘. Which we did do, we started writing and we recorded some demos and stuff. Everything seemed fine and then he just stopped responding. I texted him a bunch, loads of emails back and forth, no response whatsoever.

We were quite confused, like ‘what the hell is going on?’ sort of thing, maybe he’s having a break, maybe he’s tired, we don’t know. And I received a message from him, something along the lines of ‘Asking Alexandria does not exist unless I get what’s owed to me.’ So I was confused, like what’s owed to him? I don’t really understand. Long story short, we were left in a bit of a pickle, like a bit of a situation, we had to decide. Do we end Asking Alexandria, this band that we’ve worked so hard for for the last decade, this thing that we love more than anything. Do we just throw it away, do we end it?

We’ve got these tours coming up, we’ve got the Sumerian ‘10 Years In The Black Tour‘, we’ve got this Europe run that we’re booked for that Denis is supposed to be on, but we can’t get ahold of him, don’t know if he’s coming, don’t know if he’s not coming. And we just sat down as a band and we were like ‘why the hell are we doing this? Why are we doing this?’ And the reason we’re doing this, the reason we started this band to begin with is because we love music.

We were five best friends who loved being around each other. We all loved the same music, we loved playing music together and that’s why we started this band and that’s why were continuing this band. We’re a family, we always have been since day one.”

“Obviously over the last sort of few months we’ve rekindled our relationship with Dannyand what happened in the past sucked and it hurt us, obviously I said things and Dannyhas said things—that happens. It was in the past and it was shit. But at the end of the day, we’ve been best friends for a decade and that’s why this is the move that’s right for us. Right for us as a band, right for us as people and friends and right us for Asking Alexandria, this is full circle, this is right back where we started and why we started the band.”

“We were just as blindsided as you guys, we woke up one day… We were just like ‘what the fuck? how is this happening to us again? Like what is it, why does this keep happening?’ So we made the choice, do we cancel the tour, do we break up? No, we don’t, we fight just like we always have done. We carry on doing this tour, we come out because we love doing it and we love playing for you guys.”

“When Denis first joined the band a year, year and a half ago, people within the music industry and fans alike, they all told us these different things about Denis‘ past, and we got many warnings and we said, that’s his past forgive and forget, we don’t know any of that side of things. So we gave him the benefit of the doubt and you know, there’s no smoke without fire and I guess we found that out the hard way.

I’m not gonna sit here and talk shit on Denis, he came into this band and he was amazing for us at the time. We had a blast with him, we had the best time ever. As far as we could see everything was going great, obviously it wasn’t. There’s not really anything we can do about that. We once again have been left in a rather shitty situation and we’ve picked ourselves up off the floor and we’ve continued going. Asking Alexandria is back to the way we started with the original fucking members.

The reason that we’re all here today is because of the five guys who started this band about a decade ago in Yorkshire together with the same dream, the same goals, the same love and passion and those five guys are back in the room together again and honestly we couldn’t be happier. This is Asking Alexandria.”