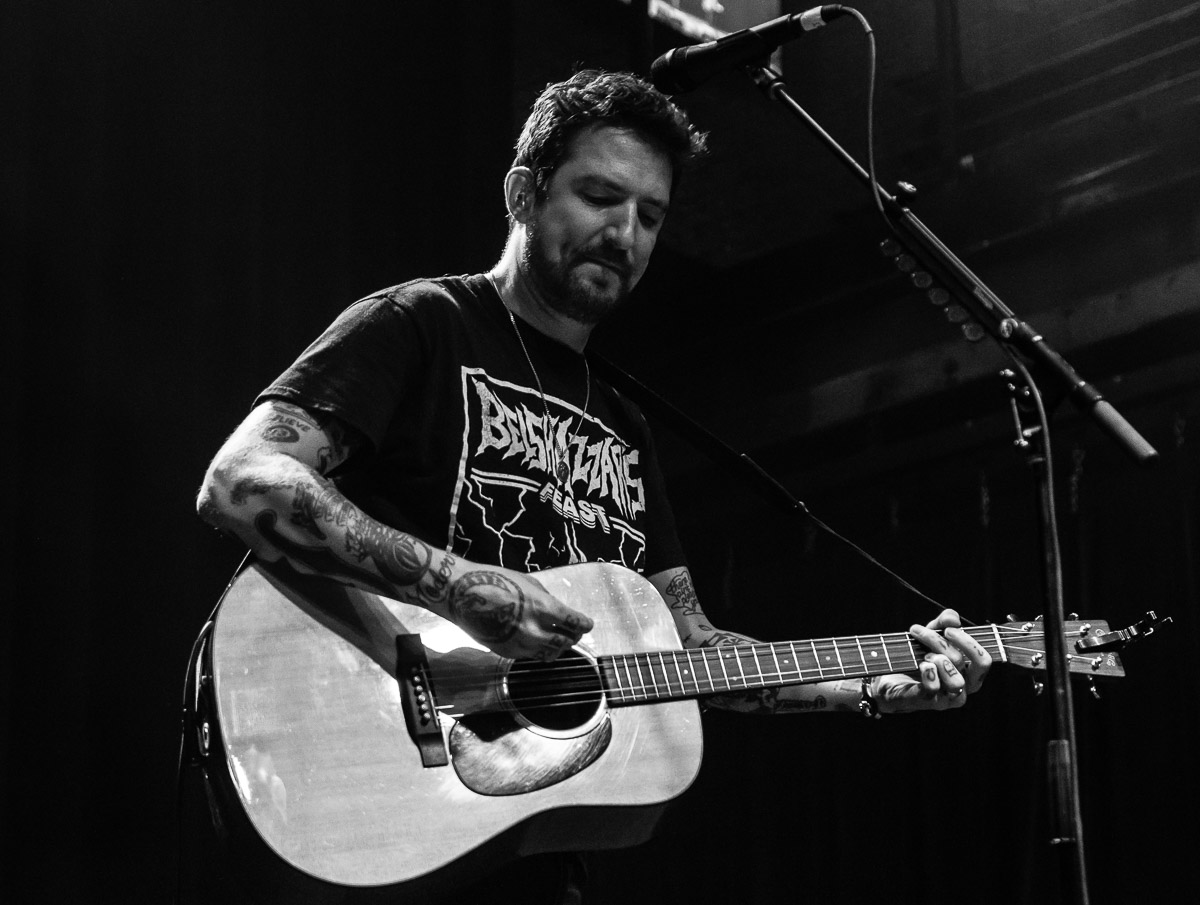 “It feels so good to have live music back”.  This was the sentiment that was most prevalent on this Friday evening as English musician Frank Turner brought his current acoustic tour to Mercury Ballroom in Louisville, KY.   I arrived at the venue as doors were opening to a fairly light crowd, but as the time grew closer to show time, more and more people filled the venue to create a sizable crowd for the evening.  Opening the show this evening was Nathan Gray & The Iron Roses.  The frontman for longstanding post-hardcore band Boysetsfire, Gray has formed his solo project in recent years that allows him to be more introspective.  Telling the crowd that the band had only learned how to play the songs acoustically three weeks prior, they didn’t let it slow them down at all!  Gray moved all across the stage throughout the set and was incredibly engaging with the audience.  Telling the crowd how great it felt to be playing songs live again, he talked about how much love he had for Frank Turner, whom he had known since the 90s, for bringing him out on tour with him and for being a genuinely good person.  He said a lot of musicians talk the talk of being kind and taking care of each other, but how often times they end up being not so good people, but that Frank was the real deal!  Speaking to the crowd a great deal about mental health, and sharing his own struggles, he talked about how its ok to reach out for help and about how music saved his life.  He performed many songs from his 2020 album Working Title, including the track “No Way”, leading the crowd into a sing along that had them shouting the song’s chorus “NO WAY IN HELL I BREAK!  NO WAY IN HELL TONIGHT!”.  It made for a very poignant moment!  With lots of energy and sincere messages of gratitude for music, for life, and for touring once again, the set was packed with lots of energy and I have no doubt that Nathan Gray & The Iron Roses made some new fans this evening!

As Frank Turner took the stage with Matt Nasir, the crowd cheered and clapped, ready for a fun night ahead.  Of all the times I have seen Frank Turner live, I don’t believe I have ever seen an acoustic set (aside from a time or two on the first 2 Flogging Molly Cruises), but band or no band, Frank Turner is a dynamic performer!  He and Matt Nasir were able to convey the same sense of energy and fun and the fans were ready to sing along from the first song. Starting the set with “I Knew Prufock Before He Got Famous”, he played a long set full of fan favorites such as “Get Better”, “The Next Storm”, “Photosynthesis”, “The Ballad of Me and My Friends”, “If Ever I Stray”, “1933”, “Be More Kind”, “The Road”, “Four Simple Words”, “The Gathering”, and “The Opening Act Of Spring”.   At one point, when Matt had left the stage for a few songs, he performed one of my favorites, “Redemption”, a song he rarely plays live.  One of the best parts of a Frank Turner show (aside from the music) is the banter and crowd engagement.  Whether it was he and Matt joking with each other on stage, or talking and joking with the crowd, there was a lot of crowd engagement throughout the set.

Addressing the crowd early in the set, he talked about how he had 2 rules for every show.  Number 1- “Don’t be a dick”, which he joked seems simple enough but that he always sees people struggling with it.  And number 2- “If you know the words to a song I’m playing, sing along!”.  For this tour, he added an addition to rule number 1, which was to show Matt Nasir some love whenever he did something really impressive on his mandolin!  This led to many “MATT! MATT! MATT!” chants throughout the evening, which was great fun.  Mentioning that this was show #2570, he joked about how, as a kid, he would sit in his room and dream of the day he would play show #2570 in Louisville, KY.  Like Nathan Gray before him, Frank talked about how hard the pandemic shutdowns had been.  He went on to talk about how he had always dreamed of playing shows in different cities across the world in his youth, which he has achieved as an artist, but how over the past year and a half he thought that was over.  And if shows did come back, he wasn’t sure if anyone would come out, and sincerely thanked everyone for coming out to the show this evening.

Aside from many of the fan favorite songs, he and Matt played a few new songs, including his newest single “Haven’t Been Doing So Well”.  Towards the end of the set, he talked about how normally at this point in the set, they would walk off stage for about 90 seconds, before coming back out on stage for an encore.  He said they were just going to skip that part and go straight to the encore, joking that the green room was down a long light of stairs and was too far away.  He then  told the crowd, in good humor, how if there is one thing that he has learned from the many, many shows he has played, it is the overwhelming need for audiences to chant the phrase “ONE MORE SONG!”.  So he and Matt indulged the crowd, walking to the back of the stage and chatting a bit while the crowd chanted “ONE MORE SONG!”.  He and Matt played a few more songs before it was time for the last song, at which point the crowd booed and Frank laughed “You just said that (“one more song”) though!”.  They ended the evening with the perfect song, “I Still Believe”, which really encapsulated the message of the evening.  “Who’d of thought, that after all, something as simple as rock and roll would save us all.”  And save us all it has!