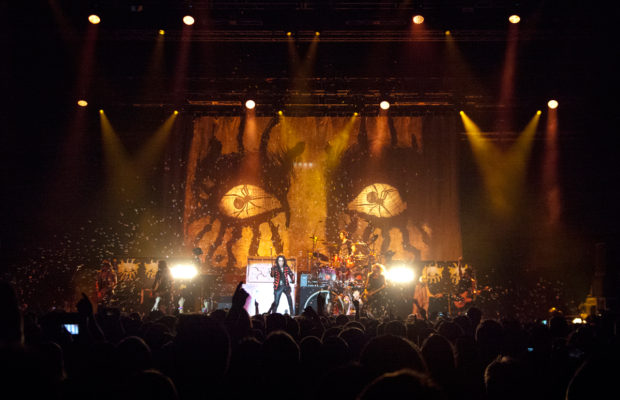 With a small handbag and a thin jacket last Saturday, we made our way to Stone Free Festival– a new kind of Rock festival that was promised to set a new standard for rock festivals in the UK.

Stone Free Festival took place at the iconic O2 in London, conveniently located a spit away from public transport and big enough to provide non-stop entertainment throughout the day across 4 different stages.

The line-up kicked off at 12:20 sharp with American blues-rock guitarist & singer, Jared James Nichols and band, who were the first to initiate The Indigo Stage that day. Despite the early start and having just landed from a previous show in Spain, Jared and the band have quickly switched the energy level to 11 and played a flawless set, featuring his recently released single ‘Don’t You Try’.

Following Jared’s set, more shows and events started to take place around The O2 complex: The Entrance Stage, which, you’ve guessed right- was located at the entrance, featured sets by 5 promising bands. We were particularly impressed by Vodun’s and Dorje’s performances. Despite playing on a relatively small stage, both groups sounded so good and professional, and we’d definitely want to see them again performing on much bigger stages.

The Speak Easy Lounge was the go-to place for live comedy and spoken word, while a classic rock vinyl fair was happening in the main hall throughout the day.

Meanwhile, back at the Indigo Stage, things continued to heat up. The versatile line-up, which at some points felt like a shuffle between rock genres, have created a situation where the audience was made of people from all ages and music tastes, which was fascinating to witness. From traditional American blues by JJN, through jazzy tunes by Jackman, quality punk rock by The Virginmary’s, old school glam by the incredible Michael Monroe and all the way to alternative metal made by Therapy?, the Indigo Stage kept us hooked throughout.

By the time the shows have ended at the Indigo Stage, the main O2 Arena doors have finally opened and fans from all ages swarmed in to claim their spot at the front.

The O2 Arena didn’t seem like it was at full capacity, which turned out to be the case later that night, even when headliner Alice Cooper went on stage.

Affected by a delayed flight and other unforeseen circumstances, Blackberry Smoke, who were the first to play the main stage, have started about 15 mins late. This lag seemed to have also affected The Darkness’ set later that night, who had to cut down one or two songs towards the end of their set due to a strict curfew that was set for the night.

Apocalyptica, who went up next, have raised the tempo with a mind blowing set, which included their impressive instrumental, cello based repertoire, as well as a number of songs performed with singer Franky Perez. They’ve quickly managed to get the audience all hooked up and ready for what was yet to come.

Then came on The Darkness, who can work a crowd like no other band can. With plectrum-throwing teasing and fancy outfits, their performance was spot on. Singer Justin Hawkins has powerful stage skills, which at times reminded us of the legendary Freddie Mercury.

To seal a day of incredible performances, it was now headliner Alice Cooper’s turn to show us how it’s done.

Alice Cooper’s concert has a concept and a storyline. He doesn’t simply go on stage to play his music- he puts up an entire show. Armed with an impressive stage setting and props, bad-ass musicians, a live snake and years of experience – Alice’s show was full of surprises and did not fail to impress us one bit. Paying tributes to some of the greatest musicians to ever walk this planet, Alice played 4 covers in their honour (see the full list of songs here).

Stone Free Festival had everything needed in a recipe for a successful music festival: A great venue, brilliant sound throughout, an impressive line-up and a convenient location.