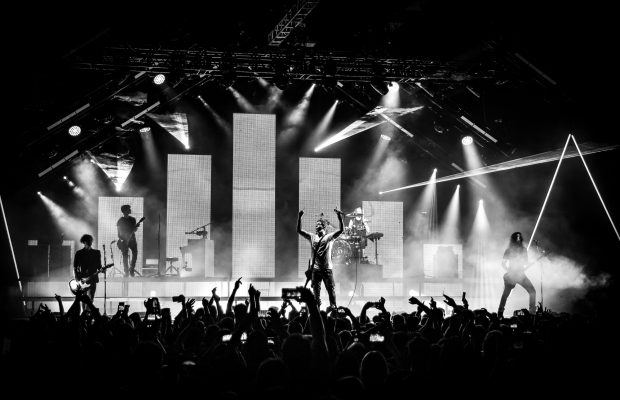 Saturday evening the Summer Gods 2019 tour came to a sold-out Stage AE in Pittsburgh. Despite the 104F heat that day, the place was completely filled and everyone was there to have a great time.

Opening the night were Ra Ra Riot and they did a great job getting the crowd ready for the two main acts of the night. Both Jimmy Eat World and Third Eye Blind played for over an hour and performed all the hits the fans expected to hear.

First up were Jimmy Eat World and they started their set with “Pain” off their album Futures. Their set continued with a great variety of songs from their latest albums, as well as all the hit singles. Shortly before they finished their performance, it started raining and it felt refreshing with the high temperatures we have had all day.  Jimmy Eat World closed with their smash hit “The Middle” and the entire Stage AE sang along loudly. What a great performance.

Up next were Third Eye Blind and I was so excited to finally see them perform. They started their set off with a new song “Screamer”, the title track off their newest album due to be released October 18th. They performed the song with the band behind a curtain on a riser and when the curtain finally fell, the energy at Stage AE was unbelievable.

When frontman Stephan Jenkins performed a solo acoustic version of Beyonce’s “Mine” for a friend who was getting married, everyone quietly listened. At some point during the song, his guitar got disconnected from the speakers and we were treated to an acapella version of the song. Once Stephen realized the audience could not hear his guitar he jokingly said that he “was not singing this song again”.

After 75 minutes they closed with “Semi-Charmed Life” and left everyone wanting more.

I can not wait until they come back on tour in the fall. Make sure to catch them or on their current  Summer Gods 2019 Tour when they come to a city near you.