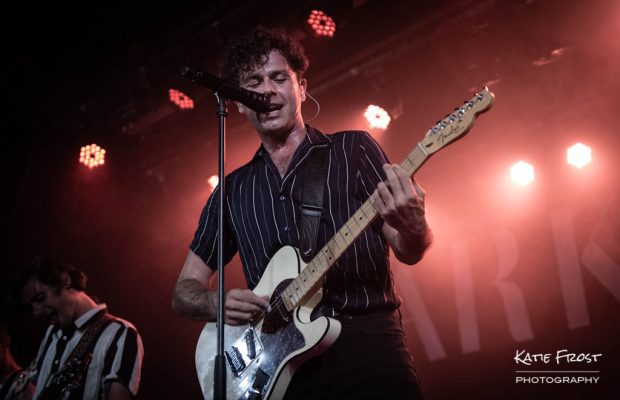 Massively popular in their native Canada, Ontario five-piece Arkells played ULU in London last Thursday as part of their Rally Cry tour, promoting their most recent album of the same name (released in October 2018). The show was one of just seven performances by Arkells on this side of the Atlantic which included Transmit Festival, Kendal Calling and Y Not Festival. Arkells first came to my attention via fellow Canadian musician Lights, and when I saw they were playing my city I figured I should go check them out, as the band have been heralded as one of the most passionate and high-energy live rock bands.

Thursday was the hottest day on record in London, with temperatures reaching an incredibly sticky 38 degrees. As I joined the queue of fans eager to get out of the heat, I prayed that the venue had air conditioning -and luckily it did! First to take to the stage were London-based folk-pop duo Guise who are Jessica Guise and Laura Hanna. They played a wonderful six-track set with just one guitar and a tambourine, and their beautiful melodies were popular with the crowd.

By the time Arkells hit the stage at 8:30pm the room was pretty packed, and despite the air conditioning, it was still incredibly warm inside. The band opened their set with latest single “Hand Me Downs” and the crowd sang along to the “woah-oh’s” with huge smiles on their faces. Despite the heat, the band were full of energy and put on an incredibly passionate performance. Vocalist Max regularly stepped forward from the stage to interact with the crowd, and all five band members looked like they were thoroughly enjoying themselves.

Back home in Canada, Arkells played a hometown show last summer that sold 24,000 tickets, making it one of the biggest domestic shows in the country. Here in the UK they played a venue holding just over 800 people, toning down their usual arena-sided performance to fit the smaller setting, but it was still a great time. They played a massive nineteen-song set of tasty riffs, groovy basslines and pop melodies, featuring tracks from Rally Cry as well as other fan-favourites from their back-catalogue. There was dancing, there was a proposal in the crowd, Frank Turner was there – what a fantastic evening! For a taste of what Arkells’ live shows are like, check out the video for their latest single “Hand Me Downs” which was filmed at the band’s sold out show at Toronto’s Scotiabank Arena.