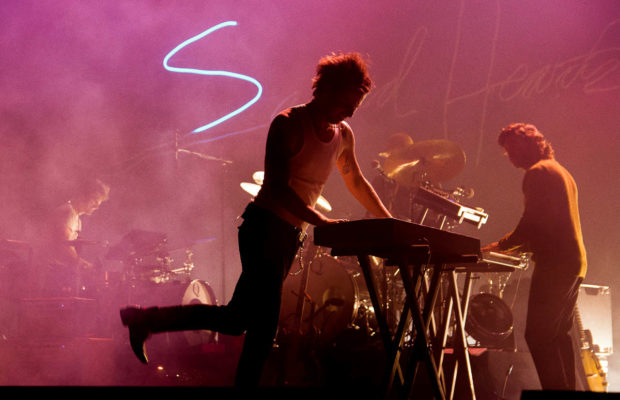 Foster The People with Palm Springsteen and Frederick The Younger

Indie pop band Foster The People, who are currently touring the US in support of their latest album Sacred Hearts Club, made a stop recently in Louisville, Ky.  The band has amassed a loyal following of diehard fans, many of which lined up hours before doors secure their spot in the front row.  Starting off their set with a new song, “Pay The Man”, the band performed a variety of songs from their three albums, including their hits “Pumped Up Kicks”, “Helena Beat’ and “Don’t Stop”.  Mark Foster is a dynamic frontman, starting the set by wearing a black leather jacket, shedding it for a white tank top a few songs into the set.  He mentioned how good it was to be touring again after being in the studio for so long to record their latest album.  He is definitely a born performer.  Whether he was dancing, playing guitar or keys, interacting with his bandmates or walking the entire length of the stage to sing directly to the fans, Foster gave a high-energy performance.  Contributing to their incredible performance was the stunning lighting they had.  From white light, to multicolored light, a kaleidoscope of colors danced across the stage during their entire set.  At one point the effects were such that it looked like the band was performing under water, an iridescent light shimmering across the stage and the band members.  The band ended the set with another new song, “Loyal Like Sid & Nancy”.  Foster The People put on an amazing show, giving their fans a memorable evening.  Los Angeles synth pop band Palm Springsteen, as well as local Louisville band Frederick The Younger, opened the show.