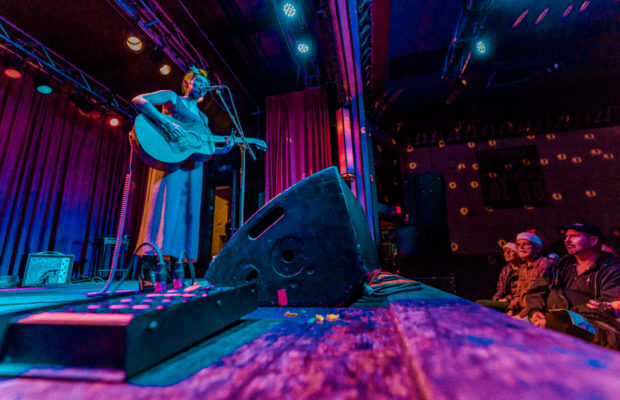 Jessica Lea Mayfield has had one turbulent 2018. So much so that when The Beachland Ballroom announced this concert this past October, I could not believe my eyes. She went through a bad breakup earlier this year and then lost her 2 beloved dogs to a poisoning at the hands of one of her exes. If you follow Jessica, you already know she has dealt with  a ton of emotional, verbal and physical abuse in recent years and poured her broken heart into the stellar 2017 release,  “Sorry Is Gone” (ATO Records). The album received rave reviews and ended up becoming a platform for many fans speaking out against their own domestic violence struggles. However, the bad kept piling on this year and Jessica had to cancel her fall tour, log out of social media, disappear for awhile and take a much needed break to focus on her mental health.

The Beachland concert was her first show in over 5 months and it was nothing short of extraordinary. She returned home to Ohio to perform a mostly solo concert (just her and her guitar) and lead off with “Safe 2 Connect 2” from the aforementioned 2017 release. After a technical snafu was resolved with the guitar amp, she continued touching on all of her studio albums dating back to 2008’s debut, “With Blasphemy So Heartfelt” (which she performed two songs from). Mick Leonardi joined Jessica for a couple numbers and even performed one of his own songs while Jessica handled backup vocals. She included2 excellent Christmas covers, one being the Loretta Lynn classic “To Heck With Ole Santa Claus”, which Jessica released a funny video for just last year. She even performed a brand new never before heard song which we hope sees a release down the road.

Jessica made sure to dress for the occasion by dying her hair green and in the shape of a Christmas tree! She even included a star atop her head! She made a comment that she had the idea to bake the audience cupcakes, but later decided not to because she didnt know how many would show. She then told us all to enjoy our imaginary cupcakes and that it was the thought that counted! Very funny.

Considering the year Jessica has had, this concert had to be a bit therapeutic getting back on stage and  performing again. Her future can only be brighter than her recent past, and if the warm feelings inside the Beachland stay with her (as they have us), 2019 will certainly be a banner year in her return.