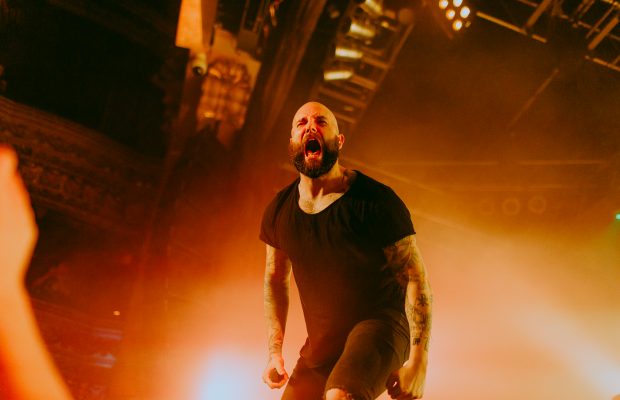 Constellations by August Burns Red (ABR) is an album that has impacted generations of people within metalcore, and is a record that never goes out of style. Therefore, it came as no shock to anyone when the band announced a ten year anniversary tour for the album, stating it would be the “the most ridiculous production and show” the band has ever put on. They don’t just talk the talk, however – they surely walk the walk on this tour. With support from Silverstein and Silent Planet, both of whom have been around the block a few times, the Constellations 10 Year Tour is something worth seeing. With the Chicago date sold out way in advance, and a line wrapped around the House of Blues far before doors opened, we knew we were in for something good.

Silent Planet took the stage first, and definitely held their own. They began their set with deep purple lights and vocalist Garrett Russell moving like lightning across the stage, belting out the lyrics to “The New Eternity,” a song about a modern day apocalypse. The crowd seemed fairly impressed for the entire set, but they really got into it when Silent Planet performed an old fan favorite, “Depths II.” With Alex Camarena counting out the beat on his drums, the crowd immediately started clapping along in rhythm, and by halfway through the song, Russell was not in the crowd, but on top of it, as a sea of people swayed towards him, reaching for the microphone and shouting the words.

Following Silent Planet, Silverstein got the crowd even more excited with a widespread range of songs and a ton of energy. Playing fan favorites like “Smile In Your Sleep,” “Burn It Down,” and “My Heroine” all under wildly strobing lights with a crowd bouncing the entire time, their set did not have a dull moment. A good warm-up for the men of the hour in August Burns Red.

The moments leading up to ABR’s set seemed like hours. The lights went down, and the fans went from rumbling with chatter to dead silent, waiting for the second the band would come out on stage. In the darkness, one could see faint shadows of men walking out with their gear. As soon as guitarist JB Brubaker lead them out onto the stage, the crowd erupted with shouts and screams and cheers. The golden yellow lights began to raise, Jake Luhrs grabbed his microphone and greeted the crowd, and smoke rose onstage. The band broke into “Thirty and Seven,” and their glowing blue lights flooded the stage. Golden spotlights spun around, pointing all over the stage like laser-beams, with intermittent white lights coating everything, the crowd included. August Burns Red did not come to play around on this tour, they came to win over everyone. Their entire set, it was hard to find a moment where a single member of the band or audience stood still. With fog and smoke columns and a ton of wild lights on top of a set that was very sonically impressive, ABR has it all. Their set was fun, exciting, and incredible beyond belief. They pulled off a ten year tour the way most bands only dream of.