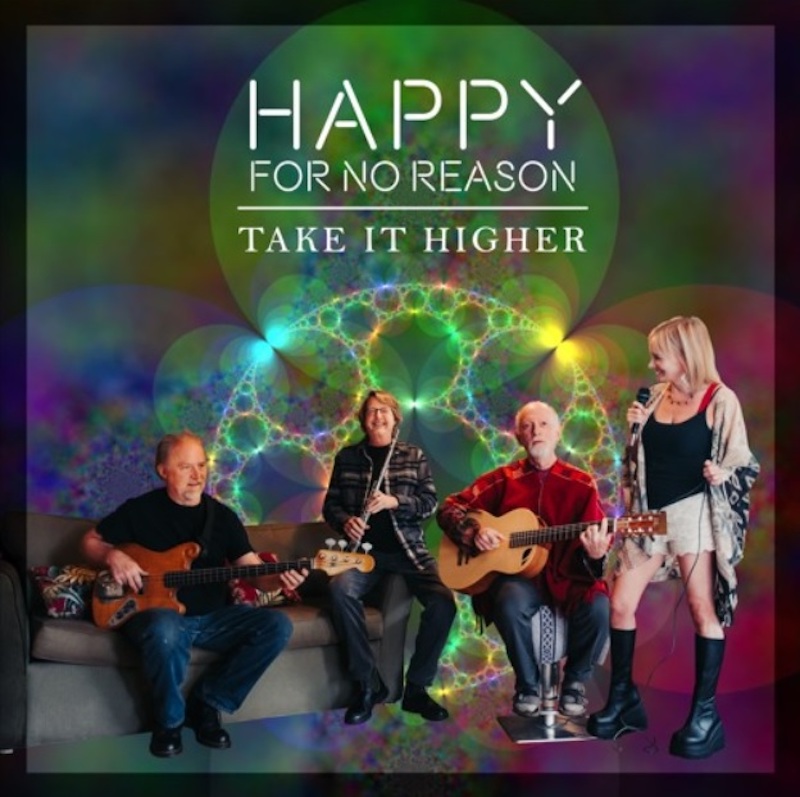 Happy For No Reason are the very definition of cool intelligent music that fulfills dreams and harkens to the late 60’s and 70’s in their sound, crafting a musical language reminiscent of the sounds of Laurel Canyon. The Portland, OR-based band celebrates every single one of life’s precious moments as two of their members are literally happy to be alive. Composed of Jo Alexis on vocals and percussion, Neil Goldstein on guitar and Mark Pritchard on flute, the founding members of Happy For No Reason navigate the rich waters of jazzy folk with a pinch of rock, a dash of soul and even a touch of Bossa Nova. The band just released their album Take It Higher, which gives off a 70’s jazz rock vibe with a folk-rock undertone. Jo’s voice is sweet yet powerful as it draws you in, making you want to listen to more. Their sound is infectious. The music seeps into your every being; you’ll want to dance and sway along as the album progresses. The collection of 12 songs is similar to Eva Cassidy meets Norah Jones with smooth melodies and captivating vocals.“After exploring a number of musical genres for my voice and songwriting sensibilities, the coming together of Happy For No Reason has been a gift,” shares Jo Alexis, the band’s frontwoman. “My bandmates are incredible musicians who value excellence, risk-taking, innovation, improvisation and the beauty of the female voice. Working with experienced jazz musicians of this caliber is an incredible opportunity.”

Their style of songwriting is based on a blend of the band member’s skills. For instance, the music for the jazz rock “Canaries (Hot Summer Nights)” was written by Neil when he was in a jazz band in the 1970’s and the lyrics were based on a poem written by Jo in 1991. Their chemistry is undeniable as they even go outside the “norm.” For example, Neil wrote the lyrics for the folksy jazz “Don’t Mind If I’m Lonely,” which is usually something Jo does. Jo wrote the lyrics for “Hummingbird Heartbeat,” like many of the other songs on the album, but she also wrote the music as this song means something deeply personal to her. It was written after a major boating accident she was involved in which took away the guitar as a instrumental tool for her. She taught herself to play piano.
Neil Goldstein has been performing in bands since the 1960s and has been in hot demand on the West Coast as he explored the world of classical and jazz guitar. In 2007, he met Jo Alexis and formed Happy For No Reason. Jo has been described as Bjork meets Natalie Merchant meets Sinead O’Connor, but she is so much more than that. A veteran of 12 albums, music is the center of her life and an expression of her soul. Beginning to write folk rock in her early 20s, she also pens rock, country-pop, contemporary pop, electronica, folk, Brazilian jazz and most recently synthpop. Working in Philadelphia, Portland and Los Angeles, her voice is one of sumptuous beauty that is evidenced by her work throughout the decades.Last but by no means least, the threesome was completed by the flautist from down under Mark Pritchard. Mark grew up in Sydney Australia, completed a degree in music education at the Sydney Conservatorium of Music and studied at the Orff Institute in Salzburg Austria. He moved to Portland in 1987 where his flute playing took a turn from classical to jazz/rock and he has been living that dream ever since. Bio taken from press release.

You can connect with Happy For No Reason via the following links: