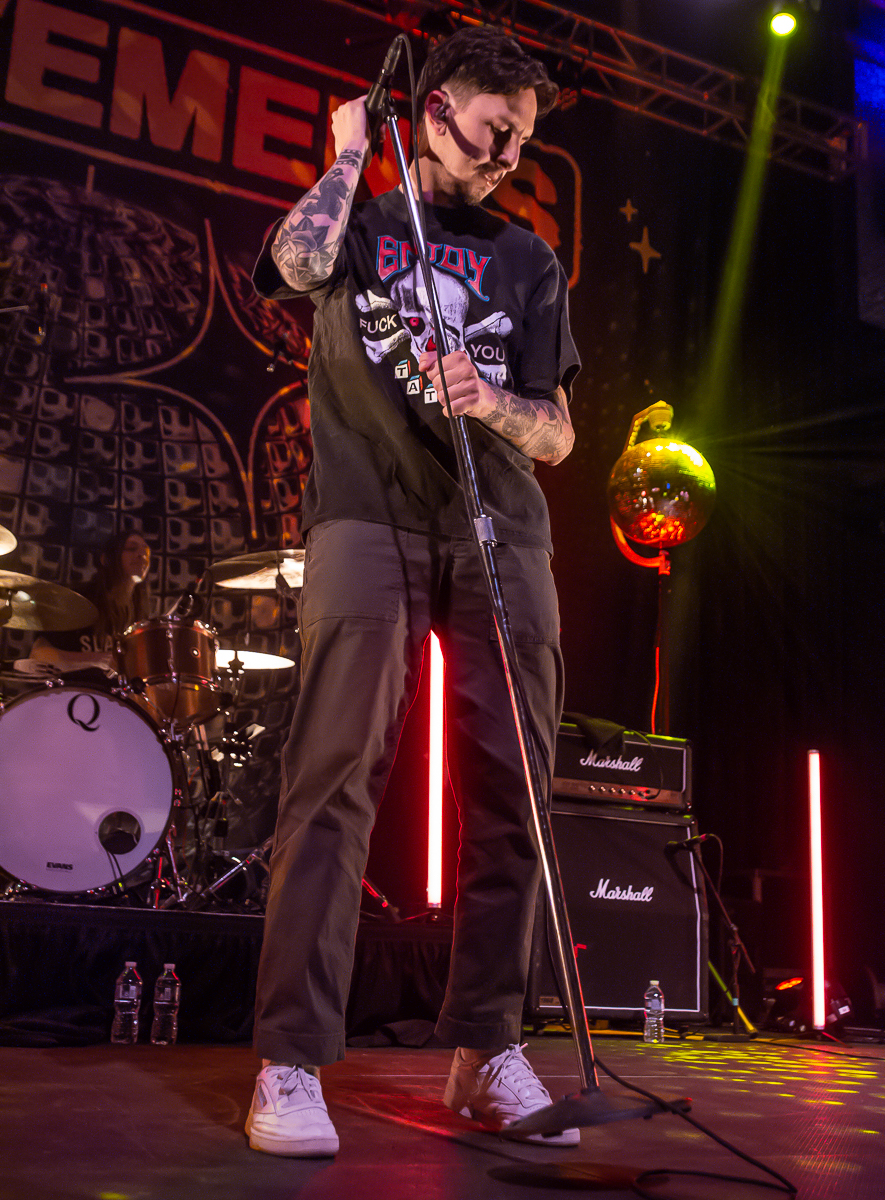 Movements with ANGEL DU$T, One Step Closer, and Snarls

California post-hardcore band Movements brought their recent tour to Louisville last week, with a sizeable crowd turning out to see the band perform what singer Patrick Miranda said was the band’s first show in Louisville! Starting the show this evening was Columbus, Ohio indie rock band Snarls. Having released their debut album Burst in 2020 and their latest EP What About Flowers? last year, they performed a nice variety of songs that got the crowd dancing.  The band had a fun energy, melodic sound, and a great rapport amongst each other, and early in the set singer Chlo White gave a shout out to any new fans in the crowd! Talking about how this was Snarl’s last night of the tour and how grateful they were to have been on the tour, they ended their set with “Burst” from their 2020 album. Next up was Pennsylvania straight-edge hardcore band One Step Closer. Having burst onto the hardcore scene in 2016, the band released their debut album This Place You Know last year to great reviews. With a really fun and energetic sound, singer Ryan Savitski was bouncing around the stage throughout the set and chatting with the crowd a bit between songs. They really got the crowd moving, with several fans singing along with their fists in the air! Next up was Maryland rock group ANGEL DU$T, which features members of Turnstile and Trapped Under Ice. With a sound that encapsulates pop rock, melodic hardcore,  hardcore punk, and early punk rock, they are high-energy and have grown a sizeable fan base since forming in 2013. Having released 4 albums and 2 EPs, they performed tracks both older and newer this evening. They had the crowd energized and ready for the evening ahead!

Ending the show this evening was Movements! Starting their set off with “Third Degree” from their 2017 album Feel Something, their fans were ready to rock from the first note! A few songs in, singer Patrick Miranda addressed the crowd. “Whose first time is this seeing us? This is our first time playing Louisville! I’ve seen how rowdy you can get. I don’t think you are as crazy as you can be. What will it take? An older song?”, with the band then launching into “Colorblind”. “That was better!”, said Miranda. “I’ll give you a pass on this next song. It’s a new song that we put out recently. It’s a little different, a little slower, and a little sexier. It’s called “Cherry Thrill””. He then went onto talk about how the band had recorded the music video for the song here in Louisville and gave a shout out to their friend Max Moore who directed the video. He went on to say how much the band loves Louisville and then gave a shout out to the opening bands this evening. “This is our first headlining tour back, post-pandemic, and since releasing our latest album No Good Left To Give. We couldn’t have asked for better bands to tour with. We put No Good Left To Give at the height of the pandemic. This next song isn’t on the album but is a b-side from the album. It’s called “Panic””. The band was energized by the crowd surfing and gave a shout out to security this evening for keeping things running smoothly, asking them “Can you guys handle some more? Maybe we should give them a run for their money!”. Closing out the evening with “Don’t Give Up Your Ghost”, “Daylily”, and “Suffer Through”, they left the crowd hoping the band makes a return visit to Louisville soon!