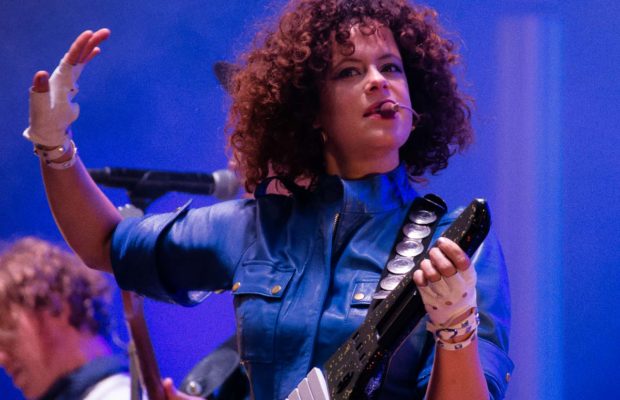 Louisville, KY hosts Forecastle Festival every year during the month of July, with the setting for the 3-day festival being on the beautiful and picturesque Great Lawn of Waterfront Park.  The park overlooks the Ohio River, providing a nice backdrop to the festivities.  The city comes alive during this weekend, with thousands of people traveling to Louisville from all over the world to attend the festival and experience all that the city has to offer.  Fans were lined up each day, waiting for the gates to open so they could secure their spot at the barricade at one of the four stages.  Upon walking through the gates and entering the festival grounds, there are plenty of food trucks and vendors, with a great emphasis being placed on local businesses, as well as several water filling stations to prepare for the day ahead.  As Kentucky is well-known for it’s many wonderful bourbons, there were also plenty of bourbon vendors that offered festival-goers the best that the state has to offer.  Several walkways connected parts of the grounds with each other, with shallow pools of water located below the bridges to provide some relief from the sweltering heat.  Festival staff and security made sure to remind people to stay hydrated and provided water to those who were congregated by the stages, often poking a hole in the lid of several water bottles to spray water into the crowd.  With many amazing artists performing this year, it was hard to decide which stage to focus on.  Whether one likes well-known popular acts, indie artists, local and regional artists, rap or EDM, Forecastle Festival always features artists that will satisfy many musical tastes.  Aside from the four stages to choose from, there was also a party cove for those who love DJs and electronic music.  The party cove was a shaded area off to the far right side of the grounds, with a ship set up with a stage inside of it on which DJs/electronic artists performed.  This was a hot spot for many of the younger festival-goers who were looking to dance and enjoy the shade of the many large trees that adorned the small hills.  New this year, and set just outside of the party cove near the water, was a Ferris Wheel that offered riders a great view of the city and the festival, as well as a large ship that swung back and forth, lending a bit of a carnival theme to the weekend!  Fashion/festival wear is a major trend across the festival circuit and Forecastle saw it’s fair share of fun fashion looks.  Girls were adorned with flower crowns, bikini-style tops and plenty of glitter, while a few guys were covered in glitter, as well, and fun suits (I spotted a guy with a white suit covered in pineapples!).  Everyone was ready to have a great time and listen to their favorite bands.  While Friday and Saturday were sunny and hot, Sunday brought a bit of relief with cloudy skies and a bit of rain to cool things down. The rain didn’t dampen the fun though, as the crowds and the bands performing were in high spirits regardless.  Forecastle Festival is a beautiful festival with friendly staff and security, great vendors, great bands  and an overall great spirit.  It’s easy to see why it’s praised as one of the best festivals in the US.  Check out the gallery of artist images from the weekend below!