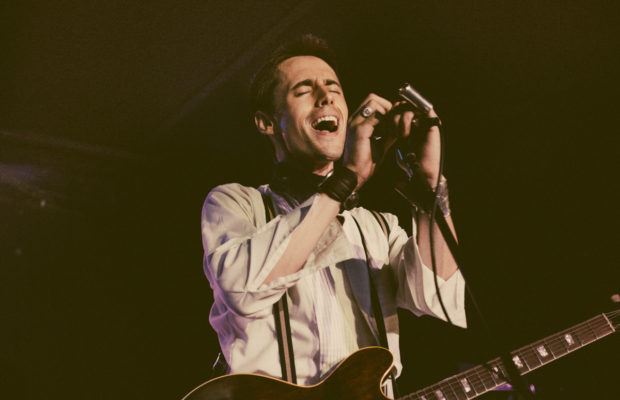 When I arrive at Mercury Lounge in the East Village, there’s a line down the block and a sign on the front door of the bar that says “tonight’s show: SOLD OUT”. When the doors open, I make my way to the front of the venue. Australian native, Dan Krochmal, opens the show. His angelic voice accompanied by an acoustic guitar he plays himself, makes me thankful for arriving to the show early. He plays a set of a few covers and a lot of originals, and gets everybody excited for the rest of the night with his tunes and witty on stage banter. He finished his set, and not 15 minutes goes by before the man of the night, Reeve Carney, takes the stage. He’s dressed in a dress coat, and is sporting a lace handkerchief around his neck. Carney looks as though he just arrived for his wedding, not his first live show in three years, but the crowd absolutely loves his look. His set is filled with original material, playing only one cover the whole evening, which was ‘Close’ by Nick Jonas. It seemed like an odd choice when I noticed the song on his set list, but Carney’s rendition was different and completely his own which was a nice and welcome surprise.

Carney is a very talented singer and guitarist, he plays with such passion, you can see the music taking over every part of his body when he performs. He’s never worried about what he looks like; he just let’s himself get lost in his own music, and it’s a really beautiful thing to watch. He plays a song called ‘Amelie’ that he usually plays in a band with his brother, but tonight he plays it on his own. On his mic-stand is a holder for a kazoo that he expertly pulls out with his mouth, mid-guitar playing, to play a kazoo part multiple times during the song. In the last verse of the song, he even somehow manages to sing, play the kazoo, and play the guitar at the same time; it’s really something that needs to be seen to be believed. As well as playing the guitar and kazoo, throughout the set Reeve plays the piano. He closes the show with a song called ‘Up Above The Weather’ that everybody in the room knows the words to. Most of his set has been new songs that have yet to be released, and while fans usually aren’t very receptive to hearing new songs live, Reeve’s fans are more than happy to hear his new work. But, when he does decide to close the show with an old song, the crowd rejoices.

It’s more than obvious that playing live music is what Carney was born to do. He has music in his soul and it needs to escape into the world for everybody to enjoy. There’s no doubt in my mind that his name is going to be one we’ll be hearing for quite some time to come. His music is timeless, when he first starts playing he takes you back to the years when The Rolling Stones and The Beatles were in their heyday. If you ever see the name Reeve Carney as an up and coming act at your local music venue, buy a ticket, you won’t be sorry.