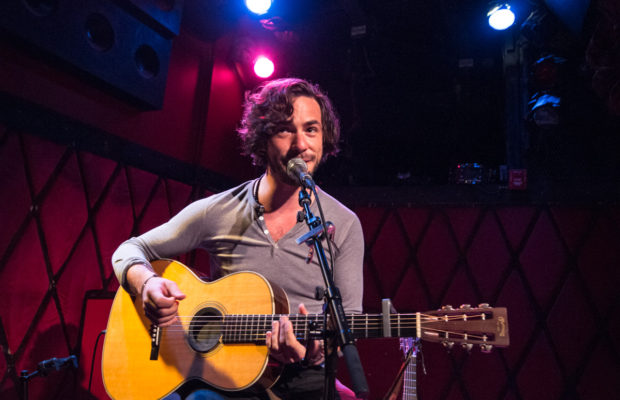 On Sunday, March 5th, with just five hours of sleep under his belt due to flight delays, Jack Savoretti took the stage at Rockwood Music Hall’s stage two for his first out of two sold out nights. For only having such little sleep, you could not tell by his illuminating smile that lit up the entire room and his banter with the audience between songs that was heartfelt and made you feel like you were talking to a long time friend—Not to mention when he spoke Italian when someone in the audience spoke to him in Italian.

Fans came from near and far—one couple came from Oregon and decided to make a weekend out of it, visiting NYC’s tourists spots before coming to the show on Sunday night. With his raspy voice and the delivery of his songs, you can’t help but to be drawn into his world of love, loss, and all of the in-betweens.

I first found out about him six years ago because of a thing called Sofar Sounds and I have been waiting patiently to have the opportunity to see him live. To get to see him play live right in front of me, not even two feet away, at one of my favorite venues in the city, Rockwood Music Hall, was a dream come true. Fans of his began lining up an hour beforehand, just to get the opportunity to be as close as possible, not sure when he would return next— he did mention that they are trying to put something together for May.

Playing songs off of his latest album Sleep No More and some off of his previous albums acoustically he had audience members singing along word for word— in awe that they were finally seeing him live in such an intimate space. I am definitely looking forward to seeing him live once more. One time is not enough. Until then, I will be enjoying my copy of Sleep No More on vinyl that I purchased at the end of his show on Sunday on repeat. If you ever have the opportunity to see him live, go. He puts on a show and sings with such emotion that it will stay with you for years to come.