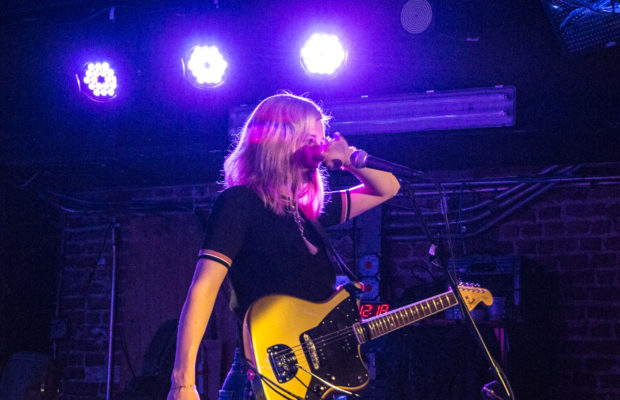 On Saturday, March 4th, even the cold weather could not keep the fans away from a sold out late night show at Mercury Lounge nestled in the Lower East Side of Manhattan.

Starting off the night was a band called Mal Blum and the Blums from across the bridge in Brooklyn, NY. They got the crowd going with songs such as “Robert Frost” and “Reality TV” off of their EP You Look a Lot Like Me. There were quite a few fans in the audience who were singing along word for word, making you want to be able to do the same with just as much enthusiasm.

Up next was the band Ian Sweet, also from NYC, who will be supporting Slothrust on numerous dates throughout the rest of the tour. Ian Sweet, is composed of three members— Jilian on vocals, Tim on drums, and Dame on bass. Playing songs off of their debut album Shapeshifter and their self entitled EP they had members of the audience feeling their vibes and singing along, leading into the anticipation of the headliner of the night to take the stage.

As Slothrust took the stage to their sold out show they brought smiles to the audience members faces. Even though they are now based out of LA, the once Brooklyn trio was welcomed like an old friend to a crowd that had been long-time fans. I first saw Slothrust a few years back open for July Talk and Drowners at Brooklyn Bowl, and I have seen them a few times over the years, but I was very excited to see them as a headliner.

Slothrust is a forceful, dynamic filled trio—composed of Leah Wellbaum on vocals, Kyle Bann on bass, and Will Gorin on drums— with deep charismatic vocals, funky rhythms, and lyrics that put others to shame, they make you always want more. Their sound and show evoke feelings that you thought you might never have to experience before, or if you did, they were thought to be long gone— but with their catchy melodies and a delivery of lyrics that stay in your head, they are brought to the forefront.

They played songs including “Horseshoe Crab,” “Like a Child Hiding Behind Your Tombstone” off of their latest album Everyone Else along with older favorites such as “Surf Goth,””Crockpot,” “For Marshall,” and two new ones tentatively called “The Pact” and “Peaches” that had the crowd going.

Be sure to catch them on tour if they come to a city near you. I highly recommend them as a band that you need to see in your lifetime.