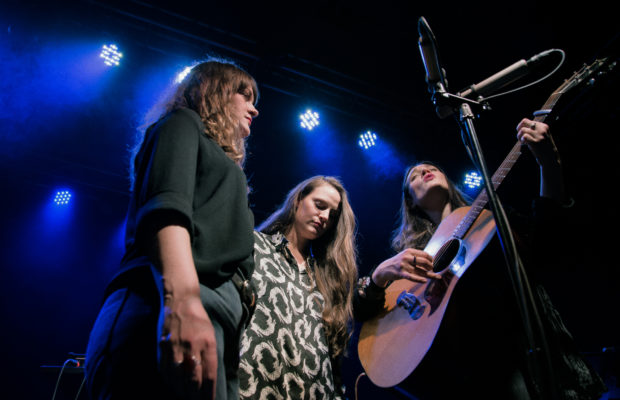 The English folk-rock trio The Staves made a stop in Louisville, KY on their current US tour to a packed house!  The nearly sold-out crowd was treated to a variety of songs, ranging from older hits such as Gone Tomorrow and Mexico and newer songs such as No Me, No You, No More and Tired As Fuck.  Although much of the set was upbeat and included their drummer, the sisters also came to the front of the stage towards the end of their set with a microphone and sang three songs acoustically without their drummer.  They had the entire audience’s complete attention, with it being so silent that all you could hear were their voices.  They are incredible performers and have some of the most amazing harmonies you will ever hear.  Each of their voices compliments the others beautifully.  Opening the show was 23 year old performer and harpist Mikeala Davis. It is hard to believe that such a young performer could already be so talented on the harp.  She sang and played her electric harp beautifully. It will be exciting to see what the future holds for this young talent.