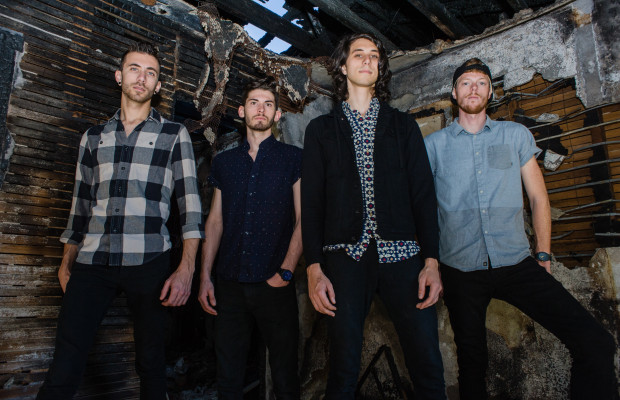 From sunny Tampa, FL is the talented Airsickness who will be releasing their new EP Between All The Lies on March 31st. The EP is extremely catchy, and is a must-listen for fans of alternative rock. We recently got the chance to ask singer and guitarist Owen Jago a few questions, read them below!

You guys are from Tampa, Fl. What is the local music scene like there, and would you say it was a big factor in all the success you’ve had?
Our scene in Tampa is amazing! Theres always a relevant band coming through, all the fans are like a family and they stay in touch with each other, and everyone in Tampa has been extremely supportive of us. They’re our rock.

You recently just released a music video for your new awesome single “Faking Smiles.” What was the experience like filming the video?
Our good friend Ben Johnson made shooting it a total blast! We went in, set up super quick, played the song enough times, and even got to goof around on some things and go a little crazy. It was awesome and we’re glad people are enjoying it.

You’re also about to drop your debut EP Between All The Lies at the end of this month as well! Is there a general theme that the EP and all the songs are about? What was this experience like as well?
Each song talks about similar situations, but they all have a different meaning from each other. And we hope that whoever hears the EP interprets it however it speaks to them. Writing it was fun, but recording it was REALLY fun. As soon as we went into the studio, we were all able to bring out whatever it was we were feeling at the time through the attitude of the music. We all had an equal voice through it as well.

What is your favourite song off of Between All The Lies and what was it written about?
My personal favorite is Never Wanted. It was my main chance on the EP to just let everything I had built up inside out into an amp and a mic.

Did you find that you encountered any new challenges while recording these songs than with previous songs?
As you grow as a person and as a musician you encounter challenges in what you next but thats what makes you better. In this EP particularly for me it was a challenge to go deeper, lyrically, and more aggressive vocally.

What is your personal cure for “writers block” while writing music?
The biggest thing is to not stress on it for a long period of time, I’ve beat myself up in my mind over parts and the more you feel stuck, the more stuck you’ll be. The best thing is to get lost in something else for a little bit, then go back to it.

Do you have any plans for touring during the rest of 2015? Are there any cities that you’re very excited to visit?
We really want to try to go all over the country this year. Its just a matter of when and how. Right now we have an EP release show for “Between All The Lies” in Tampa on March 28th, and a couple FL dates with The Strive; Winter Park April 23rd, and Jacksonville April 26th.

What is your favourite aspect of playing a live show? Have there been any moments where you’ve felt surreal?
What I love about live shows is the chemistry. Everyone is very different from one another but they all share a common love for the same thing and that’s music. We played a free show at The Ritz in Ybor city opening for New Politics and nobody at the time really knew who we were, but the place was packed and everyone in there was so amped and ready to party. When we started playing, the place just went up.

You seem like you have a very packed and awesome rest of the year ahead of you! What are you most excited for?
I’m really looking forward to the whole year but right now my sights are set on our EP release show. We’re gonna make it something very memorable for all our homies in Tampa.