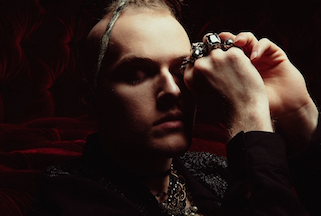 Williamsport, PA artist SRY is a brand new artist that is bridging the gap between modern pop music and urban trap music.  SRY is the moniker of Lee Fenstamaker who has done extensive touring in different metal and rock bands.  He is releasing music within a genre that his fans have coined “trap-pop”, driven by dark soundscapes, knocking drums, wavy bass-lines, and soaring vocals.  SRY goes the extra mile by not only delivering a vibe, but also an attitude.  He has played in front of 5,000 people at SXSW in Austin, Texas alongside Rae Sremmurd, Mike Will Made It and a bunch of other large acts.  As a teen, Fenstamaker helped to run a local music venue, Ground Floor 2.0, with his mom.  Those years are what what he calls the best years of his life that helped him forge life-long friendships.  Although it has since closed, the venue will be re-opening on August 21st so make sure to check it out if you are in the area!  With plans to perform soon at the 2nd annual Canyon Music Festival, he is running a contest that will give one lucky fan the chance to attend the festival with SRY and have a behind the scenes experience.  It’s Fenstamaker’s way of giving back to his supportive and active fanbase.  With plans to fly out next week to work with Billy from Good Charlotte, write more music and plan more tours, make sure to keep SRY on your radar!  You can follow SRY and stay up-to-date with all artist, music and tour news via the following links.  Check out the tracks “Poison” and “Love From Hell” below.

You recently started your solo project SRY that merges modern pop music with trap music.  What led you to start SRY and how did you come to develop your sound?

SRY was started because I got so aggravated trying to find people who wanted to truly commit to doing music full time.  So I learned to sing and started experimenting with different sounds and genres that I’ve always been inspired by.

What can you tell me about your recently released single “Poison”?  What was the inspiration behind the song?  How did Lil Young Pharoah come to be featured on the song?

Poison was basically written to be a giant middle finger to all of the people that have a lot of s**t to say but never have the means to back it up.  Lil Young Pharoah and I have the same manager and he saw the energy possible with a collaboration.  I also really enjoy my dude’s music, so it was an honor.

What can you tell me about your latest single “Love From Hell”?

Love From Hell is the story of a toxic relationship and the state it leaves your mind in after it’s gone and over with.

You have toured extensively with different rock and metal bands in the past?  What can you tell me about the bands you played with before SRY?  I read that you also are in a band called Strange Love, which is on hiatus.  Do you think you will try to do that on the side or are you mainly focused right now on SRY?

I played guitar in From Lambs To Lions for years while also doing session work for lots of other dope bands prior to the start of Strange Love!  Strange Love is something I honestly don’t have much interest in bringing back.  We all are doing something we’re super happy with and I think everyone found their place in music.  I am just happy to have the memories!

When did your love for music begin?  When did you first know that you wanted to pursue a career in music as an adult?  Who are your biggest musical influences?

My parents raised me on rock n roll and I was always thrilled by it. Funny enough, I knew that I wanted to pursue a career in music when I was super young and saw School of Rock in theaters.

You grew up and live in Williamsport, PA.  What was the music scene like there when you were growing up?  Has it changed much over the years?

When I was young there was a super active metal scene, but it just was very scattered and no one was really trying to pull it all together. Sadly now, Williamsport has scared away all of the music venues because they seem to not want kids to have anything to do.

You helped to run a music venue/youth center in your hometown called Ground Floor 2.0 with your mother Kathy.  The venue has recently closed, but what was that experience like for you growing up, to be a part of that community?  What can you tell me about the venue and how your mom came to open it?  How do you feel that it shaped you into the person and the artist you are today?  I read that it might re-open!  How are things going with trying to re-open?

It was the best years of my life, honestly.  Not only did it bring my family even closer, it also helped me meet people that are still super close with me.  I started going to local shows there when I was 12 or 13 and I remember my mom used to worry so one day she snuck in to check it out and ended up wanting to be apart of shaping the community together and making it something more for the youth of our city. Honestly this will be the first official announcement, but August 21st Ground Floor reopens and it will be my first official show in my hometown!

Do you feel that being a part of Ground Floor 2.0 has helped you to have a better understanding and navigation of the music industry?

Absolutely!  It was my first time in my life I was working with bigger booking agencies and how I learned networking skills!

What can you tell me about your contest to give a fan the chance to join the SRY crew for a day on for an upcoming festival?  What festival?  How has the response been?

I’ve been super fortunate to develop a super supportive and active fan base that shows me so much love.  I thought it would be an awesome thing to give someone the chance to come see what the behind the scenes is like.  The festival is called Canyon Music Festival and it’s their second year doing it.  The response to the contest has been wild!  I’ve had hundreds of people enter and I can’t wait to select a winner (I’ll be doing it on live stream).

You have also recently embarked on a fitness journey!  You have discussed your struggle with your body image and the toll it’s taken on your mental health.  What made you decide that this was the right time to start a fitness regimen and how do you feel it has helped you?

I hit just short of 300 lbs about two years ago and it got to the point that I couldn’t even look at myself.  I had an amazing friend that offered to take me to the gym and see how I liked it and I honestly ended up falling in love with the lifestyle.  Today I’m down to about 160 lbs and I feel like a new person!

What’s next for SRY

I fly out to LA next week to work with Billy from Good Charlotte, which is unreal.  I grew up a huge fan of the band and it’s just really wild how life works out.  Beyond that, we have LOTS of music to release and wild tours to announce.   Thanks for catching up with me!