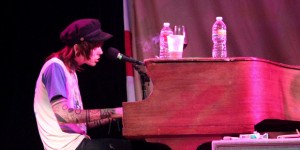 Carter Hulsey began the Time Travel show in West Hollywood at the House of Blues. Although he may not have been the main act, he definitely caught the crowd’s attention. After the show there were many people lined up to buy some merch and looking to catch him for a quick autograph or picture before he headed back into the venue. The next set, Fake Problems, kept the crowd energetic throughout their whole set. They really left people even more excited for the following sets. A Rocket to the Moon had everyone singing along to their songs. The most memorable moment was when Nick Santino, the singer, asked everyone to join in for their song “Oh Dakota.” Next was the act the majority of the crowd was there to see. There were many NeverShoutNever fans in the crowd sporting some of Christofer Drew’s signature accessories such as the bear and sailor hats as well as “love is my weapon” tees while singing along to his songs, old and brand new. Although there was no encore, the show had left the crowd with a feeling of excitement in hopes that they would possibly get to meet the people they came to see after the show.