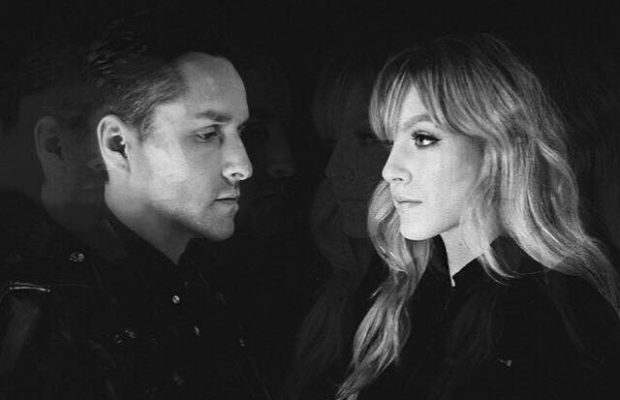 xylø is a California electronic duo consisting of brother and sister Paige and Chase Duddy. Having come to recognition online with their first single entitled “America,”xylø ‘s developed a worldwide fanbase, from the United States to Malaysia and Russia. Having only released an EP so far, they are currently working on releasing their debut full length album and just wrapped a fall tour with The Naked and Famous.

When did the two of you decide you wanted to start a band together?

Paige: We started working on music together a couple years ago when Chase asked me if I could sing on a track that he was working on for an advert. We got to write a few more songs together for commercial use which ended up getting a really great reaction on the internet. From then, we decided to start a band and take xylø seriously.

What is it like being in a band together, being siblings?  Does it present unique challenges?

Yes, there are challenges at times because we are brother and sister as well as [being] 10 years apart, but for the most part, we are very fortunate to be able to be in the position we are, experiencing the things we have, together.

Do you typically write songs together or do you write separately and then come together to work on the track?

Chase usually starts a track with chords or a beat first, and then we work from there and write the melody/lyrics.

You came to success before being signed to a label and with relatively few songs released. How have things changed for you since the release of “America” and signing with Sony Music?  Do you feel as though being on a bigger label has opened some doors for you?

Yeah, I think it took what we were doing to the next level. We have a great team around us working very hard and we have got to see so many awesome opportunities come through since signing with Disruptor Records. Chase and I still are very much involved in everything that we were doing before signing to a label. We still write our own music, make our own art work and merchandise, collaborate on music videos, etc. But it’s awesome to see our team grow over the past year.

How does it feel to have such a growing worldwide fanbase at this early point in your career?

It’s amazing. We love talking to new fans everyday and seeing our music shared across the globe. It’s so inspiring to hear that our music has connected with people and that’s growing everyday.

You’ve had the opportunity to open for some amazing bands such as Oh Wonder and The Naked and Famous.  Going forward, are there any bands you are dying to tour with?

Have you had any especially memorable tour experiences so far, either positive or negative? We had an amazing night in Atlanta. We went out to a bar with TNAF and it was soooo fun! The next day we played a gig there and I had mic troubles and even ended up having to walk off stage for a song while they tried to fix it. The crowd was cheering so loud in support for us and it ended up being a really weird/amazing gig. Wouldn’t change those moments if I could.

Your song “Fool’s Paradise” has been described as an anti-Trump song.  What are your feelings, post election?

Disappointed in this country.

What can fans expect from your upcoming album?

Loads of awesome new music that with make your panties drop.