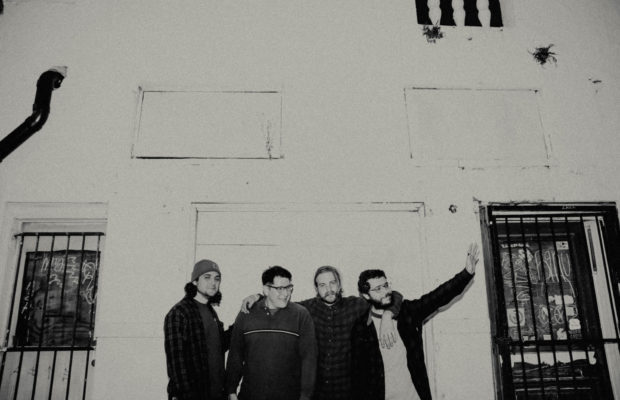 New Orleans is known to be famous for music, and the local band scene is a thriving one for sure. A few weeks ago we were able to do a Q&A with Dan Morreale, Matt Harris, Edward Pina, and Michael Rivera of newly formed New Orleans band Hand Out after they opened a packed show for Balance and Composure!

When and how did Hand Out form?
Matt: Hand Out started as the vehicle for songs that Dan and I have been writing for the last few years. We’ve only recently got things going with the full lineup.
What was the thought behind naming your band?
Dan: Literally zero thought, but you can make something up!

Hand Out is comprised of members from two well known Louisiana bands that both recently broke up. What has been the reaction from local fans with the new blended unit?
Matt: People seem pretty stoked so far. Supergroup alert!
How is Hand Out a differentiated effort than the past bands that you guys were members of? (Does it feel like a fresh start, or a continuation, etc.)
Matt: It’s a fresh start, for sure. Things are more streamlined and focused.
What artists do you draw inspiration from?
Matt: It’s a lot of the classics like Taking Back Sunday, Manchester Orchestra, Jimmy Eat World, Third Eye Blind, As Cities Burn, Pedro the Lion, Copeland, Dignan, etc. You can also throw in 90’s emo and some hardcore.

You recently opened for Balance and Composure for your second ever live show together as Hand Out, which is kind of a big deal. If you could open for any band in the world, who would it be?
Dan: WATERMEDOWN // Matt: Taking Back Sunday // Mike: Third Eye Blind // Ed: Chon
How does the writing process for you guys work? Does one person initiate it or is it more of a collaborative effort?
Matt: This first release is made up of songs Dan and I wrote alone in our bedrooms, but now with the full lineup we are able to bring ideas to rehearsal and flesh them out together as a band.
Are you guys hitting the ground running (in terms of booking shows, recording, writing, etc.) or trying to take opportunities more organically?
Matt: Ya! We’ve got a few shows left to close out the year, and then our first release will be out in January!
What can people expect from Hand Out in coming months?
Dan: A few shows in December, EP release on January 12th, and then touring until we die.

Photos and Interview by Jordan Hefler