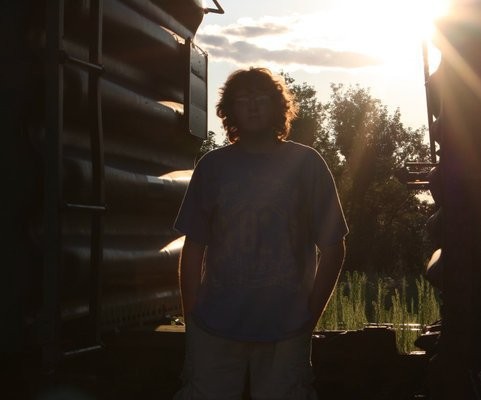 How big of a part did music have in your life as you were growing up?
Growing up, music was my everything. I started playing the keyboard at the age of two, and through the years that followed I taught myself how to play by ear. I was a shy kid growing up, and instead of going out to play with my friends, I would throw all my effort and passion into music, making it my priority. I spent far more time in my basement writing love songs than I did studying for tests at school, and when I was 12, I built a recording studio down there and started recording my own music.

If you could go back in time, what band or artist would you go watch?
If I could go back in time, the band I would love to go watch would be Marianas Trench. Although my music (genre-wise) is nothing like theirs, they’re talent for finding inspiring, powerful, and often times clever lyrics amaze me, and motivate me as a songwriter.

Where do you see Diary Of Snow in a year or so?
In a year, I can honestly say I could see Diary Of Snow gaining some ground in the music industry, or at least my genre. Within the last few months, my band has actually become noticed for the first time, and I feel as though some people are moved by my words of love and loss. I love my fans, each and every one of them, because they’ve given me the sense of purpose I longed for as a kid. All I wanted with Diary Of Snow is to express the feelings that can only be expressed by music, and I feel like a lot of people relate to that. I’m not a cocky guy, and I won’t tell you that I’m the next big thing, because I’m not. But I am real, and my lyrics stay true to human emotions. I think that’s what people need to hear nowadays.

How did you come up with Diary Of Snow? Who thought of it?
When it comes to the name of the band, Diary Of Snow was kind of a mix of things that inspired me. During the winter months, especially earlier on in my childhood, I would stay indoors late at night and watch the snow fall. As I did, it would often inspire me to write a new song. The snow inspires me, as do a lot of things. The Diary part comes from the fact that my songs are mostly about experiences I’ve had, whether they’re negative or positive, about love or about heartbreak. The songs that I write tell the story of my life, and that’s why I feel as though this band is my diary.

You just released the “Fight For This” EP. How was the response from your fans? Was it what you expected?
The response was amazing! I had expected to sell around 50 copies, mostly because I’m an unsigned and undiscovered artist and I don’t have a huge marketing team who can advertise the release for me. But as the day of the release went on, people kept spreading the word about my album, and I was getting post after post on Facebook, Myspace, and Purevolume sending positive reviews about it! It was far better than I expected, and at this moment I could NOT be happier.

How would you describe your music to someone that’s reading this interview now, but has never heard of Diary Of Snow?
My music isn’t very had to describe, because I choose not to hide behind a wall of complex metaphors and clever wordplay (although I do appreciate people who are able to do that.) Each song I write is based off a basic human emotion; love, hate, happiness, despair. And each song relates to a certain experience that plenty of people can relate to, whether it’s begging someone you love not to go or to give you a second chance, expressing your feelings about a girl/guy you’re too shy to talk to, it’s pretty straightforward.

Which song off “Fight For This” would you say is the most meaningful to you? Why is this?
Definitely the title track, Fight For This. When I wrote this song, I was at a really low point in my life. I’d just been forced to leave college due to issues at home, I’d lost a couple friends I’d known since middle school, and the girl I was in love with was debating leaving me. I wrote that song for every person at that moment who didn’t believe in me, who didn’t think that I could pull through and get my life back together. The song sends a very clear message: “I messed up, and we both that know, but that doesn’t mean I don’t love you enough to fix this. I need you to trust me.”

What inspired you to start Cheyenne’s Music Box? What separates this side project from Diary of Snow?
Before I started writing full length songs, I used to sit down at the piano and create instrumentals. I think that sometimes songs with no words can have more meaning, and say more simply by the emotion of the song. I noticed that once I released “Daydreams” (a completely instrumental song) under Diary Of Snow, lots of people starting complaining that there were no words. When I was in a band called City Lights the night, Diary Of Snow was my side project. When the band broke up, it became my main focus. I realize that my instrumental songs don’t really strike a chord with most of the fans of Diary Of Snow, so I created Cheyenne’s Music Box as a side project for whenever I decide to compose an instrumental.

Is there anything else you’d like to say?
Thank you very much, this means a lot to me! All I’d like to say is; to any struggling unsigned artists in need of advice, here it is. Don’t try to be your favorite band because you think it’ll gain you popularity, because if it does, people only love you for being exactly like someone else. Write how you feel, and make people love you for you. At least to me, that’s what success really is.