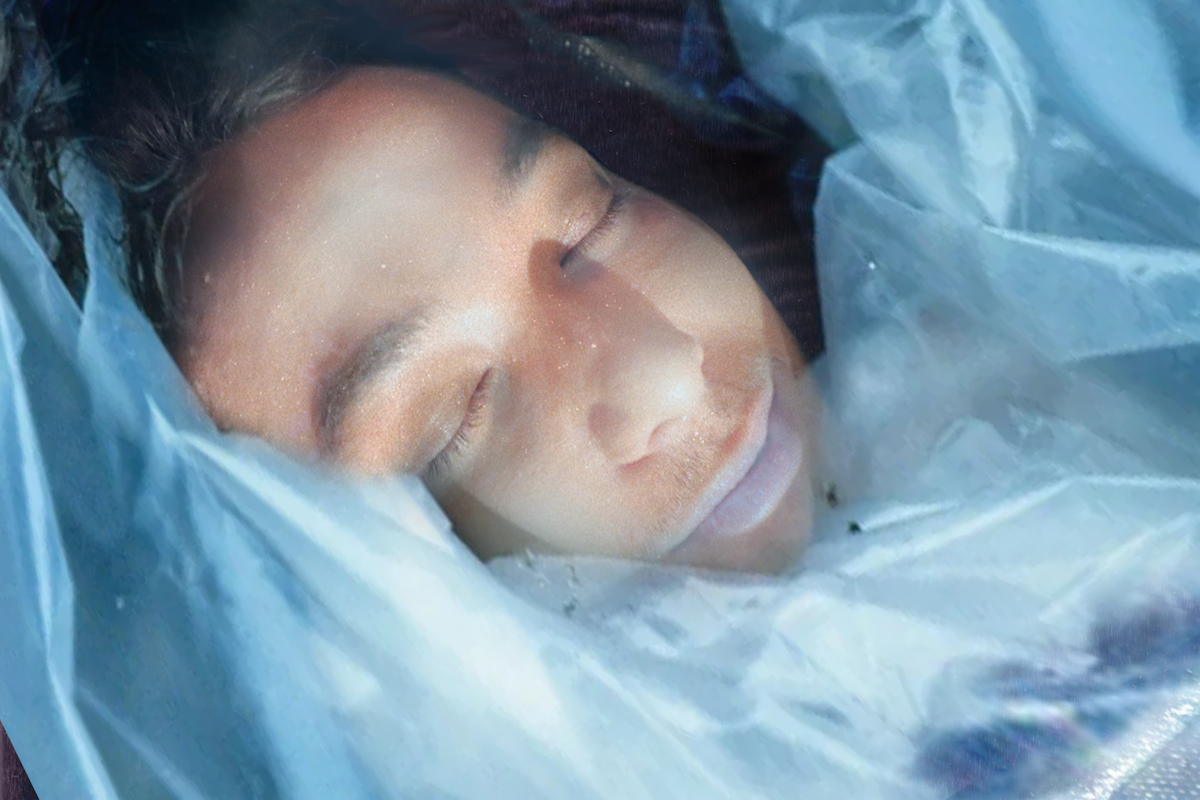 A love for Jimi Hendrix and learning and emulating his performances was New York artist JAN3T’s musical training in his early years.  With an intense love for collaboration and live shows, he began to feel lost and isolated during the latter part of the pandemic, with a search for online creative outlets causing him to stumble upon MAHIRA dischord.  The outlet allowed him to connect and collaborate with a huge pool of artists from around the world, involving himself in many different musical projects.  It was during this time that his latest project JAN3T began, with the online community being the first to know him as JAN3T.  In his words, “The name JAN3T just came from trying to find something that can encapsulate the far out sides of my aesthetics. I’ve been making music that’s both gritty/thrasher-like and sweet/crooning for a really long time and it has taken years for those things to begin to naturally merge. JAN3T is kind of a reflection of that. I wanted a name that could serve as a vessel for that wild range of style.”  Having spent the first part of the pandemic songwriting, the material will comprise his album to be released in the coming months via Brooklyn’s Super Fine Audio label.   On June 24th, JAN3T’s first single “Allons Y” was released and was inspired by the political climate during the summer of 2020, at the height of the George Floyd protests.  The entire recording and production only took a couple of hours and the track accurately depicts how many might’ve felt during the current events.  It’s a song, however, that would’ve been hard to write any other given day. He explained that “It’s tough to [write about politics] without sounding like you’re getting on your soapbox. In the 70’s and 80’s artists could just sing “War, what is it good for, absolutely nothing”, but a lot of us are immune to earnest and direct messages like that now. Political songwriting in the 2020’s is an absolute tightrope act. “Allons Y” might be the first song in that bracket I’ve ever written that I actually feel good about. It’s kind of a weird thing to release for me since I have family that’s in the police and work in prisons and also have friends who have been affected by police brutality. I feel like people on both sides might be upset with me, but I also don’t really believe it’s my job to censor myself, especially when the song shows up as pristinely as this one did.”  He has alos released a lyric video for “Allons Y”, with animation done by his girlfriend and artist Kygomei.  With his debut album in the works, he will also be releasing a three-song EP ahead of the album’s release.  He is also working with a variety of different artists on some cool music.  You can follow and connect with JAN3T via the following links:

What can you tell me about your childhood and when your love for music began?  Who were some of the influences that informed your sound(s) as an artist?

There was something completely transcendent about the way Jimi Hendrix lit his guitar on fire and then coaxed the flames before smashing it to pieces at the end of the song “Wild Thing” from the Monterrey Pop Festival. I used to learn all of his performances note for note on the guitar and try all the movements – behind the back, playing with the teeth – copying him on the TV. I wasn’t allowed to light the guitar on fire though because it was my dad’s. That was really my musical training up until my 20s.

What do you enjoy and find inspiring about living and making music in New York?

It’s inspiring getting to play with so many amazing musicians. It is hard because everyone is hustling and people don’t have time to daydream in New York. I’d love to pull a Bon Iver at some point and disappear into the woods and come back with musical expressions for humankind.

Over the years, you have expressed yourself through many collaborative projects and have made music that is both gritty/thrasher-like and sweet/crooning.  How have you gone about merging these sounds, which you have said has naturally begun to happen throughout the years?

I made a lot of really ‘soft’ music for years. I’m an old school RnB head. At some point I was feeling stuck so I decided to crank the dial all the way in the opposite direction. There is another project out there on the internet with full-blown violent thrasher music. After that, the two kind of naturally started meeting in the middle. There is still a little bit of a schizoid dichotomy in my music. The fusion is not complete.

How did you discover MAHIRA discord online and in what ways did it become an outlet for your creative energy, as well as help you to connect and collaborate with a huge pool of artists from around the world?  In what ways did MAHIRA discord help to birth your most recent musical project JAN3T and what can you tell me about the project?

JAN3T material was all written before discovering discord in the first half of the pandemic. In the second half, I lost steam and became miserable and isolated. I am used to constantly collaborating and doing shows with people in person, so I was feeling lost. I started searching for online creative outlets and stumbled on MAHIRA’s discord really quickly and instantaneously became involved in so many projects through the internet. Now, I kind of prefer working online. MAHIRA’s discord are the first people to know me as JAN3T. I was testing the name out on there. People got to know me as that, and then it just stuck.

You recently released your debut single “Allons Y”, which you have said you wrote in the summer of 2020, during the height of the pandemic and the American socio-political mayhem.  How would you describe the message of the single and what can you tell me about the quick recording and production process?

I was on an absolute winning streak at that time creatively. I moved into a new place and wrote and recorded it in a few hours – it was almost the first thing that I did upon moving in after setting up my gear. I don’t want to describe the message because I am a dogmatic proponent for interpretation and subjectivity in art. I’ll just say that the summer of 2020 was ripe with political emotion and movement and what happened in my creative process on that day came from outside of myself, though it was filtered through my lens.

Although you have said that your songwriting doesn’t tend to lean towards a political message, “Allons Y” has one.  You have talked about how it can be hard to write about politics without sounding like one is getting on their soapbox, so how did you go about approaching the lyrics for this song?  Why do you feel that political songwriting in the 2020’s is such a tightrope act?

I misspoke when I said I don’t tend to lean towards a political message. I would say I don’t force it. I actually have a lot of political colorings in my work, it is just subtly mixed in. It’s my viewpoint and my thoughts coming through my work as naturally as possible. I think it would be difficult to be politically curious or occupied in your mind and not have that come through in some way in your writing. The lyrics for “Allons Y” were just a direct reaction to the things I was seeing and experiencing around me. I think political writing has to be a lot smarter and more subtle nowadays. Blanketing political statements feel tired, over-worn, and lacking in nuance. I hear a lot of cliches in political writing that vanish as soon as they are sung. I think what made this song work for me was that got specific in my inspiration from Generation Z – and I got lucky in that. It really wasn’t planned as such.

You have named Generation Z, whom you say seem more bold and courageous when it comes to social justice issues, as the inspiration for “Allons Y”.  Do they give you hope for the future?

They do. In some ways, they have a much more realistic understanding of our troubles as a society. Millennials, for the most part, grew up in a financial boom – many of us graduated high school before the recession of 2008. I think that as a generation we are somewhat delusional. We’ll see what the next generation does, but thus far from my conversations with younger people, I feel really inspired and invigorated.

Technology usage was controlling me. I was a servant to the programs that were hacking my neurochemistry and trying to analyze my individual data for advertising purposes. We’ve all had this experience before – opening your phone to check the time and 15 minutes later you’re still scrolling your feeds. I decided to become autonomous with my usage of technology. I rarely/never use social media anymore with the exception of discord. When I use technology, I try to do it with intention – not mindlessly scrolling to avoid some anxiety or discomfort. The mindless behavior serves always to avoid some form of discomfort. When I sat with that feeling in the mornings I found that it would gradually increase until it crescendoed and then ultimately subsided. I learned something about myself –  I’m bigger than my anxieties and discomforts. I can feel them, and they won’t kill me.

One thought I have on the state of mental health in this country is that I think it’s interesting how younger people are so aware of mental health now. People are willingly disclosing information about their diagnoses to each other. On the one hand, it is great that people are becoming more aware and that could lead to greater compassion for others. On the other hand, a person’s over-identification with their diagnoses could make change more difficult. It will be interesting to see how it all shakes out.

Soon after writing “Allons Y”, you fully wrote your entire debut album!  What can you tell me about the album and what listeners can expect?

Hahaha, actually it was before “Allons Y”! “Allons Y” was one of the last tracks that I wrote. There are constantly moving pieces with the album – nothing I work on is ever done until it’s released. Like I was saying earlier, that dichotomy is still there. “Allons Y” is probably the hardest track on there. There is a lot of stuff for the soft-of-spirit too.

You recently released a lyric video for “Allons Y”, as well.  What was the idea behind the animation and how did you meet and come to work with Kygomei on the animation.  Do you have any other videos in the works?

Well, Kygomei is my girlfriend. Working with your partner is a challenge, but we really came through together on this one which felt great. I am planning on doing a couple of live video recordings of “Allons Y” – one acoustic and one electric!

There are more collaborative albums in the works. The group of artists I’m working with, (shout out Pemdas, Gurley, Hassa, Finley, Felix Byrne, Carbs, iff, Jet) are evolving quicker than I can keep up with and are making some really cool music which I’m honored to be a part of.