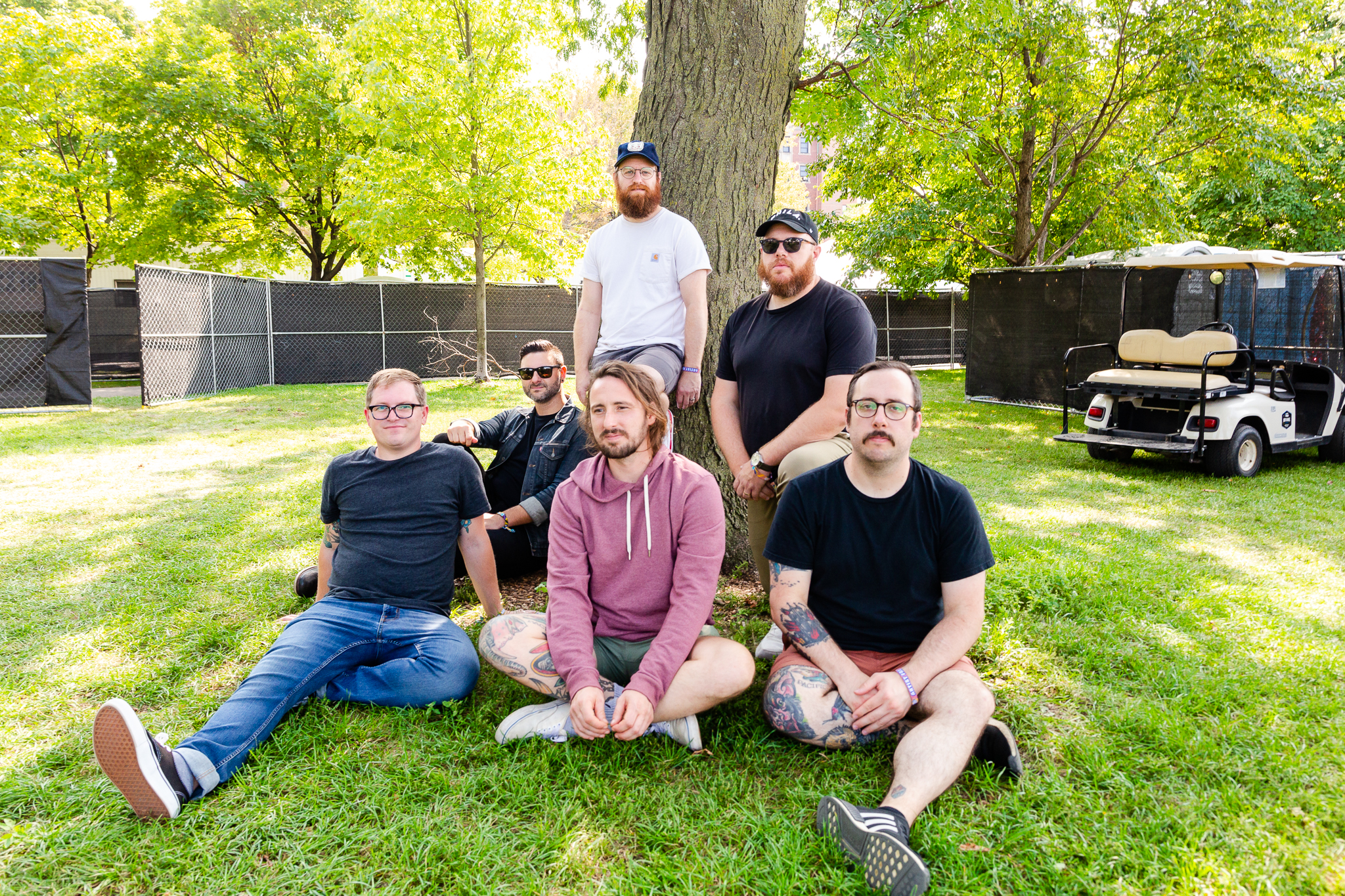 The Wonder Years have been at it for over a decade and are long revered by a loyal and dedicated fanbase. Today, The Hum Goes on Forever is out as their 6th LP, reflecting themes of new fatherhood and the weight of the world through the pandemic. Before sitting down to chat with lyricist and singer Dan Campbell, I asked members of a Facebook group I belong to called The Wonder Years Collective to share their questions surrounding the new album which set the tone for this conversation at Riot Fest 2022.

Micki Harris: So you have a new album The Hum Goes on Forever coming out 9/23, what has felt different about this record as opposed to the ones preceding it?

Dan Campbell: Well, every record is going to feel different. I think that this one everyone’s life feels different because there’s this – and I don’t know if you caught this, this global plague. It’s actually still ongoing! So it affected the timelines, it affected the isolation, the way that we wrote – everything, so that was really obviously a big difference as far as challenges go. As far as life goes, I went from having 0 kids to 2 in between the two records and when you put those two things together, it’s like “Oh, I have these children! And the world is awful!” I think a lot of this record comes from that: The anxiety of having people count on you that need you to protect them in a time where it’s very easy to feel overwhelmed and want to just, like, shut off, was a big, propelling force of the album.

But I think also since we are kind of late career– Well, it’s hard to say “late career” because you don’t know when you’re going to stop doing it, but if you ask my neck and shoulder: This week. (laughs) But you start to think about things differently; there are new challenges that arise as you make more records. Every record comes with its own challenges because every record comes with some form of preconception and expectation.

It’s like, your first record doesn’t really, which is actually its own challenge because you kind of get to set a narrative. We’re lucky enough to have done that twice, we got to re-set the narrative and be like “This is the band that we are, this is who we would like to tell people exists.” And then your follow up to that has to be a certain thing, right? Like, every record has to hit a certain sweet spot and when you get to record like, six, seven, whatever the fuck it is– Well, there’s like this whole career of expectations set, a whole career of preconception that exists about you and you have to kind of think about that and consider it from a bunch of different angles. What we decided through some helpful conversations was like, “You know what we want to write? The best fucking Wonder Years record.”

Hannah Seidlitz was interviewed in our documentary and I can’t say it better than Hannah says it, but they were like, “There’s this thing that happens to bands where they become self aware, and they could just make this thing where it turns into like, self-pastiche where you’re like Hey, we made a photocopy of a photocopy of this thing that we’ve already done and it like degrades in quality each time!” There’s also people who will like, rally really hard against that and be like, “I have to make something so different,” that you lose the core notion of who you are.

So, you know– We want to change things about our band record to record, because otherwise it becomes stagnant and reductive and kind of pander-y, which I don’t want to do. But, if you take every board off that ship and make a different ship, well then like fuck, that’s not the ship I got on. That’s not the band I came here for. So there are certain elements you can’t remove and have it still be our band, so we just needed to make sure we were correctly identifying them and being like, “Okay, this is who we are. This is what has to exist as the foundation of this record because that’s what makes it a Wonder Years record. Now, what else can we do? What other boards can we change out?”

MH: Do you feel like you had to reel it in at all from Sister Cities in terms of removing too many boards? Because I know you guys did Brakeless/Out on My Feet which was intentionally in the style of The Upsides–

DC: Yeah, it was literally finishing songs that got started a decade ago. Like, a shitty iPhone demo from 2010 of the verse of Out on My Feet.

MH: Oh, I see, so it was partially written already.

DC: Yeah, and it was like, “Let’s finish it, and let’s put ourselves back in the headspace of those records to finish it.”

MH: Okay, so that being said: I feel like this album, what I’ve heard of it so far, is sort of bouncing off of that a little bit where it’s a bit reminiscent of the earlier themes and tones. Do you agree?

DC: I think it’s career spanning. I think sonically, to me, it triangulates between our last three records, The Greatest Generation, No Closer to Heaven, and Sister Cities. I think we’re pulling in elements of all of those. The difference was, and here again to give you a bad metaphor that’s probably pretty tropey–

DC: When we made Sister Cities, we had kind of gotten to this point where we were like, “We know how to do the shit we know how to do. We think we’re really good at it and we want to find out what else we could be good at.” So we looked at our toolkit and we threw it all in the fucking trash. Let’s find out how to use new tools– We went and worked with a new producer and at every fork in the road in songwriting, we said, “Okay, our tendency is to do Thing A, so let’s do Thing B. Let’s just push ourselves, push ourselves, push ourselves to try to learn new shit.” And I think it what came out was an incredible record, but, it maybe removed too many of the boards if we’re going back to The Ship of Theseus metaphor.

DC: So with this one we said, “Okay, now let’s keep those tools that we learned how to use, but let’s bring our old toolkit out of the trash and we’re going to use all of it– The whole gammat of shit that we’re capable of. What do we think we do better than anyone else? Let’s do all that shit.”

MH: Speaking of removing or keeping board of foundation: Y’all have been a band for a long time and have had the same members for pretty much from the start. Can you talk about how that has served you as a band?

DC: I mean, I think it’s helpful to know each other and to know our tendencies, but I think most helpful is that I just think my friends are very talented so to get to write music with people that are that good is really useful! Like, it’s really great to have Mike Kennedy behind me on the drum kit. He’s a really fucking good drummer, right?

MH: Even though he’s such a bad friend… (Sorry.)

DC: No, but that’s a huge part of it. I trust them all tremendously as songwriters and as musicians, and like, they’re good at their jobs! So it makes it a lot easier.

MH: Do you feel like the core themes or what you were setting out to do with the record shifted or evolved throughout the making of it?

DC: Well, I think that when we were originally supposed to make it– Like if there had been no pandemic, we would have finished our tour in March of 2020 and we would have gone right into writing. And I was really nervous because I had no fucking idea what I was going to write a record about! I think Sister Cities was so easy because it came directly from a lot of journal entries, but I didn’t journal a lot through that process. So I was like, “I don’t have anything.” So I was going into it kind of with the same fear that I had going into No Closer to Heaven because when we wrote No Closer to Heaven, I was like, “I don’t know what I want to do!”

MH: Wow, that was like, so cute of the universe to give you all these horrible global things that would be so difficult on top of being a new dad!

DC: Well, and I struggle with that too, because people will say all the time, “Oh that’s a silver lining.” I don’t really like to talk about silver linings of a thing that killed millions of people and traumatized millions more. So it’s really difficult to find a way to respectfully talk about that. The record would have been a different record. I couldn’t say, “It would have been better or worse,” because that’s like implying that this mass death did us a favor, which it certainly didn’t. It’s just, these two things happened to run concurrently. It’s a really difficult thing to talk about especially with the respect I want to give to the people who lost loved ones, the people who were lost, the frontline workers that had to suffer through this unbelievably trauma.

MH: Yeah, that’s tricky. Well, I have one more question for you and it comes from me as a Wonder Years fan. For the last three or so albums, fans have been chattering and speculating that each would be your last, and this record is very much included in that. What is that like for you? Does it put more pressure on you each time?

DC: I think that maybe people think it because we look so old and so fucking tired. (laughs)

I think it’s also because I’ve never been shy about saying that if I don’t think we’re making shit worthwhile, then I don’t want to make it. I do not want to be a band that is stuck doing this when I don’t like it or feel like I’m making something useful because I have no other option. I want to be able to walk away if I say like, “This is no longer good for me, or good for my family, or good for my friends or the bandmates; We’re not enjoying it anymore; It’s not healthy for us.” I want to walk away then. Or if we’re making a record and we’re like, “This objectively sucks– It does not meet our standards.” Then I don’t want to make it. So that’s why I’m kind of always like, “I’m just being real: It could always be the last one,” because if we go in and make something and we’re like “Oh, we’re dry; There’s nothing of use here,” we’re not going to turn out a record. We have too much respect for the fanbase to be like, “We made this piece of shit, please buy it.” Fuck that! I don’t want to do that.