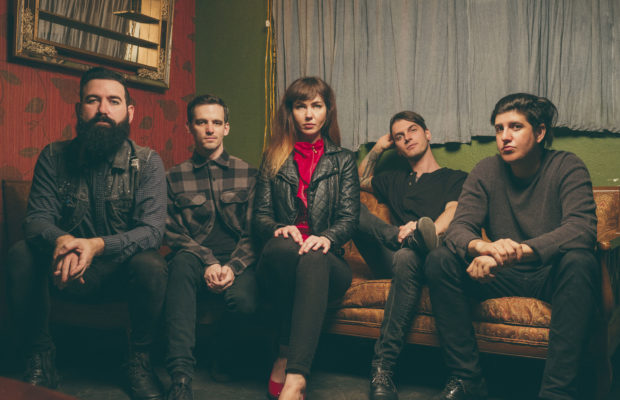 Orlando, FL alternative rock band A Brilliant Lie has been steadily making a name for themselves in the scene over the past several years with their impressive catalog of songs and powerful and energetic live shows.  Having formed in 2011, the band has grown a strong fanbase and has received airtime on many of the Southeast’s largest Clear Channel and college radio stations.  Comprised of Tara Lightfoot (vocals/guitar), Matthew Movens (guitar), Jason Lemrod (guitar), Nick Scout (bass) and Chris Lane (drums), the band has toured with bands such as Anberlin, Minus The Bear and Passion Pit, has headlined performances at House Of Blues, State Theatre and Freebird Live and has played festivals including Sunfest, Florida Music Festival and Rocklahoma.  The band released Threads: Weaver, the final EP in their 3-part Threads EP series that also includes Threads: Cutter and Threads: Spinner, working with producer James Paul Wisner (Paramore/Hands Like Houses/Underoath).  With plans to tour in support of the EP, it’s safe to say A Brilliant Lie has a bright future ahead of them!  Staff writer Emily May talked with Tara Lightfoot via email about the new EP, the band’s growth over the years and what’s next for the band.  You can follow the band and stay up-to-date with all upcoming music and tour dates, as well as stream and purchase their music via the following links.  Check out the videos for “Unwoven” and “Tarot” below.  You can check out the Threads: Weaver EP HERE.

You will be releasing your new EP, Threads: Weaver, later this month.  It is the 3rd and final EP in your Threads series.  You’ve said that this series of EP’s is not only a celebration of the band you always were, but also an evolution of what the band is becoming.  What has that growth as a band been like?  What are your goals for the band and your sound going forward?

The growth of A Brilliant Lie has explored all spectrums, honestly.  Sometimes, it was fun and fluid…sometimes it was difficult to find creativity and connectivity.  But, at the end of each installment of “Threads,” there has always been a silent moment of listening back to what we did and saying, “…Ok.  We did it.  We did a thing.”  And we’ve been proud.

Moving forward, that’s sort of up to the rest of the world.  We put an asinine amount of work/thought/emotion into “Threads: Weaver.”  Therefore, the goal is trying to ensure that anyone and everyone hears it.  Whether they like it or not…they hear it.  It’s a sad state of affairs that (in this day and age) we can’t always guarantee that, regardless of touring nonstop nor trying to understand online algorithms.

Regardless, we’re working hard to make more friends and continue to evolve our sound into the best version of ABL we can be.

You’ve released 2 songs from the EP ahead of the release, “The Tarot” and “Unwoven”.  What led you to choose these particular songs as singles?  What was the idea behind your video for “Unwoven”, as well as the process of making it?

We felt “The Tarot” was a good introduction for people who haven’t heard us yet.  It’s high-energy, yet has dark/subtle moments, which is something we like to toy with during songwriting.  Our new EP “Threads: Weaver” remains anthemic throughout, but it also sways hard to soft.  With “Unwoven,” we decided that was the best “middle ground” that we could use to describe the rest of the album (in terms of style and mood).

For the video, we wanted to showcase our ability to deliver an extremely upbeat live performance and juxtapose it with the subtle darkness of the song.  Our director Daniel Kuykendall had the basic look/idea for the video in his head, and we spent a full day shooting it.  Mind you, it was iIn a hot warehouse in Florida after being up REALLY late from playing the House of Blues the evening prior.  So…that was fun.

I read where you wrote 25 potential songs for the new EP, which got narrowed down to 10 and then 5.  How did you decide which songs would make the cut?  What was it like to do more writing in the studio then you had for previous releases and how does writing in the studio compare to having your songs written beforehand?

We are a democracy (to a fault sometimes), so we slowly went down to 10 that we all really liked for various reasons.  We then had our producer James Paul Wisner decide on the five that would make the cut… but we did veto him on one of them 😀  Tee-hee…

You have said that things really started to take off for you as a band when you became a 5 piece.  What do you feel it was about that point in time and having 5 band members that propelled the band forward to the place you are now?

Different people came into the band that had different influences and very different writing styles/ideas. That really helped take what we were already doing that was already pretty strong, and turn it into a force to be reckoned with (musically).  It allowed our sound to expand.

The band operates in a very DIY fashion.  Do you feel that the rise in social media, streaming platforms and more of an internet/music connection currently has made it easier for you to operate as independently and DIY as you do?  As you grow and become more successful as a band, what inspires you to keep that DIY spirit?

The way that music is consumed has changed so, so much that…you kind of have to keep it DIY. As we have grown, we have started to lean on people outside of the five of us (because having a good team is important…and we can only do so much ourselves).  As far as art design, writing, social media, and band business decisions, we still keep all of that in-house.

…Because we are control freaks lol.

There are some dates that we wind up in a small town we’ve never played in, and it might be…say…a random Monday.  So, we’re not expecting 200 people to show up.  However, on those random shows where there are “15 people” we play our hearts out and put all of our energy onstage as if there were 1500 people.  But everyone is into it, and we can hang out with the crowd afterwards.

For us, it is about the connection between us and the people in the crowd, we want to make lifetime friends… not just fans. And we feel we have done well at that.

With the rise of the internet that allows bands to share their music much more easily, there is an ever-growing number of bands trying to get their music heard.  In what ways do you try to stand out as a band and get your name and music out there?

The internet has definitely made it a little more difficult to stand out in a sea of sound.  So much music is at people’s fingertips.  But on our end, and artists like us, it’s a full-time job to keep up with the posts and the changing algorithms of platforms.  All we can do is try to keep up with that end of things, as well as tour relentlessly.  Despite the power of the internet, we really do feel that people appreciate face-to-face conversation, and the energy of a live show.

Tara- When you aren’t performing with the band, you freelance in hospitality, entertainment and special events.  What sparked your interest in working in those fields and what do you love the most about it?  How do you juggle your freelance work with the band?  What can you tell me about your background in fashion and high end retail?

To be honest, we all have experience/work history/passions in other areas other than music.  For me, I adore design work and the fast-paced environment of special events.  Though there is a lot of operational work involved, seeing an idea go from concept to execution is very invigorating and rewarding.  To be transparent, I’ve been trying very hard in the last year to find my footing with doing both freelancing and the band.  The band itself is a HUGE hustle.  And then adding the hustle of freelancing is tiring to say the least.  But I love it all, and I have a really rad support system.

It’s always interesting to us when we discover other bands with their own side-hustles.  Like…bands who have tour buses and play to thousands of people.  To know that they still have to go home and make money somehow…I dunno.  It’s both comforting and scary at the same time.  Comforting in the sense that we know we’re not alone in our fractured journey of work/band…but scary in the sense that we might be playing huge venues and still not making enough to survive.  So, if you really enjoy a band/artist – support them.  They need you.  LOL.

The band appeared at this year’s NAMM Convention!  What were some highlights for you and were you looking forward to anything in particular ahead of the convention?

We did!  It was a really great experience. We were able to meet some of the people from the companies that endorse us. Highlights for sure were: getting to meet Paul Reed Smith, Rich from PRS Guitars, all of the nice people at Seymour Duncan, Strymon Engineering, Ernie Ball, and more. We were able to try the newest and coolest gear in the world, hang out with friends, and more.  OH – and we met Hunter from AFI and Plini.  So no biggie…

Our new album “Threads: Weaver” came out March 29th so we will be touring in support of that, and then…um…win a Grammy? They just give those out right?

Also, if we come to your town – come to a show!!  We give really good high fives.