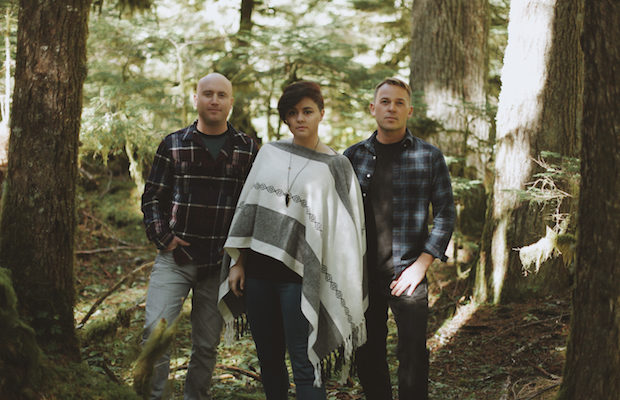 Dash|Ten is the trio consisting of Sgt. Corrin Campbell, and Staff Sgts. Peter Greenberg and Steve Ebert. As part of the US Army’s Musical Outreach Program, Dash|Ten are playing the Full Sail Stage on the Vans Warped Tour this summer.

Before the band was created, did you think that you would be juggling these two careers at once? Or could you only picture yourself having to choose between one or the other?
Corrin has been doing it for some time as a solo artist, but when Steve and Pete came on to form Dash|Ten, it was a crash course for everyone! Though the Army supports us by putting us on tour, we are otherwise completely DIY. We do all of our own recording, booking, tour management, social media stuff, graphic and web design… It’s crazy! It’s an amazing experience, though, because not many Soldiers get to do all the things that we get to learn about. We have to be good at all our Soldier tasks, like physical training, rifle marksmanship, and be up on all our training, but we also have to be good performers, musicians, and run the band. It’s incredible – but it can be quite the balancing act!

Corrin, how has touring with the US Army over the past few years helped you gain a new appreciation for or perspective of what it’s like to be a “working musician”?
Well, since we are almost completely DIY, there has been a definite learning curve. Like most bands, we have had to learn how to edit photos and video, hustle like any other band. Fortunately, the Army has really taught me to go-go-go when necessary, and the work ethic serves the “working musician” role quite well. As most independent bands in this scene know, you just can’t stop. Sleep, eat, breathe, and live music.

As a part of the Army’s Musical Outreach, you perform and share your story as a musician, solider, and combat veteran. This program inspires others and gets them interested in serving our country. Can you tell us more about what inspired you to become a member of the Army and the Musical Outreach program?
All of us decided to join the Army for different reasons. I’m not sure any of us came in knowing how long we would do it. Some Soldier join because they just know they want to do this until retirement, but each of us has had to evaluate whether we could do what we love and still be doing it with a sense of service.

Army Musical Outreach has given us a really cool place to merge our passion and desire to serve. None of us ever could have imagined that Dash|Ten would exist when we first enlisted, but now that it’s a reality – it’s amazing! The Army has really embraced who we are as people. They’re allowing us to show those who may not understand how bringing various talents and passions together makes the Army as strong as it is.

What are some of your musical influences and inspirations for writing?
We love rock music, of course, but we also have a wide range of influences. Our pride is in our musicianship – we don’t use AutoTune or edit a lot of stuff in our recordings. Our performances are authentic and raw, so we have to be proficient at our instruments. The 90s grunge era was a big influencer for us in that way, because music was so simple. You can really hear picks hitting the strings, sticks hitting the drums. It was a time when creators really embraced what instruments SOUND like. We love that, because music is such an organic element of who we are as humans. Bands like Nirvana and Sublime, as well as more recent bands like Jimmy Eat World and Foo Fighters, really represent that sound so we find a lot of inspiration there.

As active members of the Army, do you (as a band) think that has created a different or more special bond between the three of you? What specific experience(s) do you think has helped?
We get a lot of mental resilience training in the Army; still going when the going gets tough. All of us are combat veterans as well, so we have learned how to support each other when one gets tired. It has helped us pull together as a band to overcome obstacles or tough conditions, and we’re really thankful for that.

You guys are headed out on Vans Warped Tour soon. What are you looking forward to most about being on the road, and what are some of your biggest challenges on the road?
Warped Tour is a BEAST, but we love it! It’s obviously ridiculously fast-paced and the heat out there can be a total bruiser. Our deployments have definitely helped us learn how to stay hydrated and overcome that! We also are working double-duty out there because we do all the performances and fan interaction that many bands do, but we’re also setting up the Army tent and running all of the components in there as well. We’re going straight from 7am to 9pm! It requires time management and a lot of support for each other, but it’s all worth it to be able to do what we love.

What else can we look forward to this year from Dash Ten?
We have some tours in the works for the fall, and we’ll also be recording another album within the next year. We end up touring nearly 300 days a year, whether at Warped Tour, other festivals, major sporting events, and even high schools. We’ve been in every state of the continental US in the past year, so we’re looking forward to seeing as many new faces as possible!