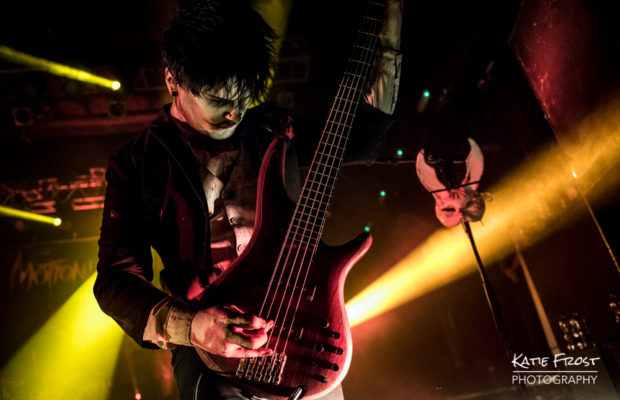 On Thursday night I headed to the beautiful KOKO in Camden. It was an unsurprisingly chilly January evening but that didn’t stop fans queuing around the venue to get a good spot for the evening’s sold out show, some of whom had been there for quite some time if the duvets and blankets were anything to go by. When I arrived shortly before doors were due to open the queue stretched right around the venue and back along the main road leading down towards Camden Town. KOKO is one of my favourite London venues and it always blows me away when I am in the photo-pit and turn round to see a sea of faces lining the tiers of the red and gold balconies that seem to go on forever, and the huge mirror ball hanging from the ceiling projecting little beads of light around the room.

First on stage were theatricore four-piece Ice Nine Kills [https://www.facebook.com/IceNineKills/] from Boston who played a brilliant set featuring tracks from their most recent album Every Trick in the Book, opening with “Communion of the Cursed”. These guys were incredibly fun to shoot, with vocalist Spencer giving photographers repeated chances of catching a converted jump-shot, as well as heading into the crowd to bring the music right into their faces. There seemed to be a lot of Ice Nine Kills fans at the show and I could hear them screaming along over my shoulder as I photographed the band. As well as tracks from Every Trick in the Book, the band also played their latest single “Enjoy Your Slay” which is based around The Shining. I had never seen Ice Nine Kills before and was impressed with their incredibly engaging performance; with its relentless pounding rhythm, soaring melodies, catchy guitar hooks and non-stop energy.

Next up were New Orleans nu-metalcore band Cane Hill [https://www.facebook.com/wearecanehill/] who opened their set with “Time Bomb”, before launching into latest single “Lord Of Flies” from their brand new album Too Far Gone (released on 19 January). The band put on a high-energy set from the very start and the tempo was only lowered ever-so-slightly in the middle of the set, before ramping right back up again for “10 Cents”. The pounding bass was so intense that I swear I could feel the floor shaking beneath me as I went to grab a quick beer after my three songs in the photopit before finding a spot to watch the rest of their set. I have heard a lot about Cane Hill since the release of Too Far Gone so it was great to get to see them live. Their set was loud, aggressive and full-throttle and seemed to go down well with the packed room. Vocalist Elijah encouraged the crowd to keep their energy levels up high in preparation for Motionless In White taking to the stage, but there was no chance of anyone being less than buzzing when the headliners took to the stage.

Shortly before 10pm goth-metalcore band Motionless In White [https://www.facebook.com/motionlessinwhite/] took to the stage, one band member at a time, and each were met with humongous cheers from the crowd. Last to walk onto the stage was vocalist Chris, flanked by two young ladies clad in skin-tight black latex dresses wielding whips.

The Pennsylvania band are currently half-way through a nineteen-date UK / European tour promoting their fourth studio album Graveyard Shift, which was released in May 2017 and they opened their set with sludgy “Rats” from the album. The last time I saw Motionless In White live was at Underworld back in 2015 and their performance and stage set-up has come on in leaps and bounds since then. Although their live shows are always theatrical and entertaining, they have pulled out all the stops for this tour and it was brilliant.

As you might expect, their set predominantly featured tracks from Graveyard Shift (including latest single “Necessary Evil”) but they also included some fan-favourites from their previous three albums; Creatures (2010), Infamous (2012) and Reincarnate (2014). For the encore they played one of their most anthemic tracks: “Eternally Yours” and Chris’ empowering clean vocals filled the room. At the end of this run of UK / European dates Motionless In White will head to North America to continue the tour. Head to http://www.motionlessinwhite.net/tour/ for dates and more info.

Not My Type: Dead as Fuck 2