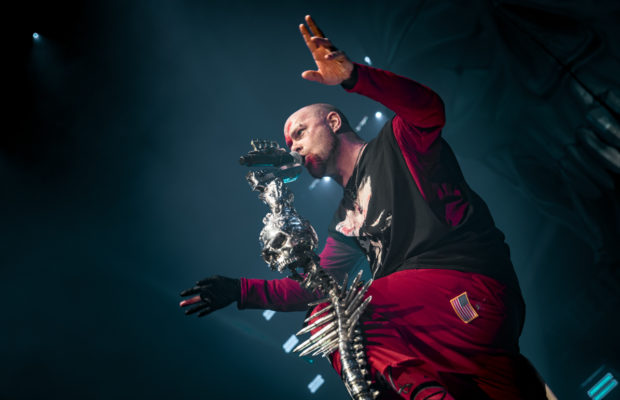 Words and Photos by Cheyenne Comerford

This was bound to be a great show, even with the chance of storms. It was a great Saturday night for a sold out show and the whole place was packed! Even though it had down poured before the show and there was another chance later in the evening, the lawn was packed and no one cared about the weather. First up was Bad Wolves, and they got the crowd ready to rock. Next up was Nothing More. At this point, management made the decision to cut the rest of the sets a couple songs short so that the show could be finished before any bad storms hit that were predicted. Like always, Nothing More gave a killer performance that ended with vocalist, Jonny Hawkins, riding the “Scorpion Tail”. They are definitely a band you don’t want to miss seeing. Then came Breaking Benjamin. They are one of my favorite bands so I was really looking forward to them. They opened up with “Red Cold River” off of their newest album, “Ember”. Again, they are a band that you don’t want to miss when they come through town, their energy is off the chart, especially with the whole crowd singing along. Then it was time for Five Finger Death Punch, and they know how to put on a great show. I should also mention that before the show started, Ivan Moody was out on the lawn doing a radio interview, surrounded by a ton of fans. That was pretty cool to see. Even though it was raining on and off, no one cared and everyone was just having fun. Overall it was a great night and one of the best shows that I’ve seen in a while. I will definitely be seeing any of these bands next time they roll into town!