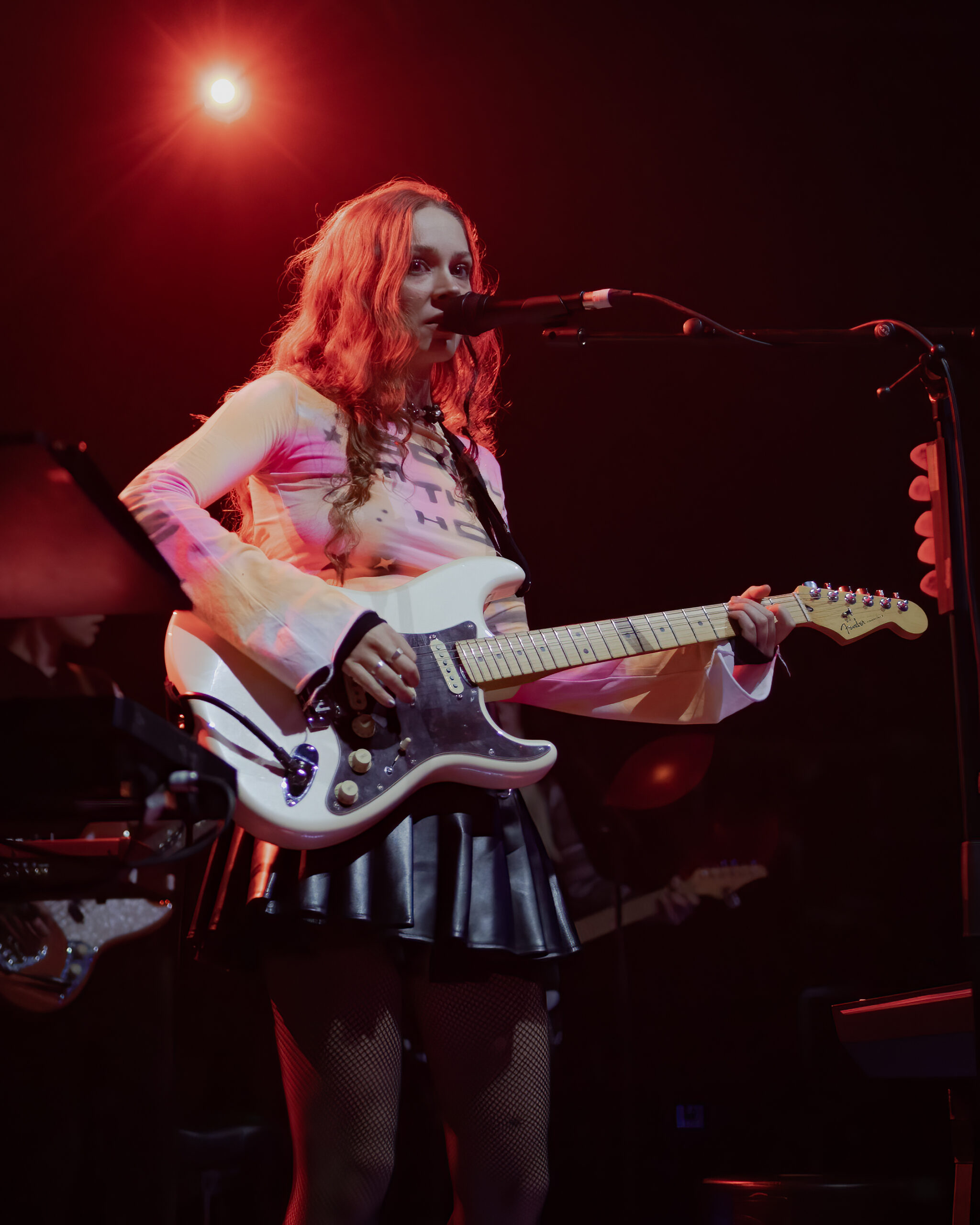 Photos and Words by Dan Rose

At Bristol’s O2 Academy, Holly Humberstone played her first sold-out headline show in the south-west city for the first date of her ‘Sleep Tight’ tour. The walls were definitely way too thin that night as Holly’s powerful voice projected throughout the whole venue.

On arrival, a large projection was displayed on the back of the stage reading ‘Holly Humberstone’ in large text, and surrounding this were numerous names, presumably belonging to fans, friends or family. This wonderful visual remained in the background throughout the duration of the evening. Holly’s fans were treated to one support act during the show, Benjamin Leftwich, who is linked to the independent record label ‘Dirty Hit.’ During her performance, the singer-songwriter mentioned that Ben was a best friend to her and that he’s helped her to write a few of her own songs.

Accompanied with a three-piece band, Holly eventually took to the stage and, during her set, she played an array of songs from her debut album ‘Can You Afford To Lose Me?,’ and even some hits from her previous EPs. Some of my favourites which she performed include ‘Haunted House,’ ‘London is Lonely’ and ‘Falling Asleep at the Wheel.’ In between songs, the Grantham-born artist spoke about a lot of personal stories; one story which stood out to me was when she told the audience about her decision to move to London overnight, explaining that she needed to do this if she ever wanted to be successful with her music. After finding a house share listed on Facebook Marketplace, she decided to take the chance and start afresh even if it was located within, in her own words, “one of the roughest parts of London.”

Before the start of every song, Holly explained how they came to fruition, accompanied with a story. Many of these were very personal as you can imagine, especially the story in regards to a song called ‘Deep End’ which she wrote for her younger sister who she cares deeply about. Fans in the crowd often raised their voices so that Holly could hear what they were saying during the moments in between songs, and the artist would often interact back in reply to what these fans said. When speaking during her set, she opened up to the crowd about how she can be a very awkward person at times, and the crowd seemed very supportive. Without fail, at the end of every single song she performed, the singer thanked the crowd which illustrated how much this first headline show really meant to her.

Towards the end, the London-based artist told the crowd that being in Bristol for the first show of her tour was incredibly special to her and that she couldn’t wait to return to Bristol in the future to perform again. At the end of the night, she asked the fans for permission to take a BeReal with her!

Undoubtedly, Holly Humberstone is only going to ascend into greatness in the future, especially because she recently won the award for ‘Rising Star’ at the 2022 BRIT Awards. This isn’t surprising whatsoever as her talent appears effortless when she performs, and her voice is just as beautiful in the flesh as it is on record. Some of my personal favourites of hers which I recommend listening to are ‘Scarlett,’ ‘The Walls Are Way To Thin’ and ‘Thursday.’