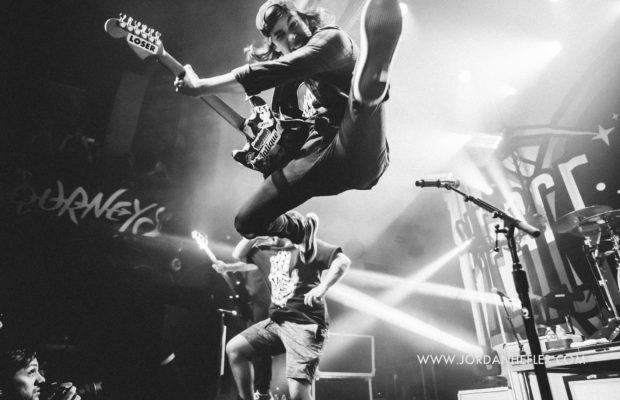 The Made to Destroy Tour

The Made to Destroy Tour has been highly anticipated by fans in the New Orleans area ever since it was announced. A lot of bands tend to skip over the NOLA House of Blues location for whatever reason, making it harder for the locals to see most of the bigger bands in the “scene.” The lineup, boasting Pierce the Veil, Neck Deep, and I Prevail, rolled into town on a Friday night in the Big Easy after the bands had spent the previous day exploring the city. I Prevail opened the show with banger after banger, including their ultra heavy cover of Taylor Swift’s “Blank Space.” Everyone was buzzing about it being Neck Deep’s first time in New Orleans, so their performance was a fresh pop punk experience for fans who haven’t had the chance to see them before. Aside from the two amazing openers, it was very apparent (by half of the t-shirts in the crowd) that most of the crowd was in tow to see California headliners, Pierce The Veil. Pierce the Veil has such a strong track record in the rock world for their unique blending of sounds and their charismatic stage presence. Having just recently released their latest album, Misadventures, the four San Diego natives opened their set with an interactive projection of a rocket ship onto a big white curtain that concealed them from view on stage. The animation depicted a rocket crashing into the city of New Orleans (impressive that it was custom to the show date) and was aesthetically designed to mimic the album cover art of Misadventures. Once the curtain dropped, the crowd went mental and the screams were piercing (pun intended.) Instead of just playing all new songs like their previous tour, the band went through their discography and even played their acoustic song “Kissing in Cars”, which has never been done on a tour before. It was apparent that the band has had extensive experience in performing, as their stage presence and set production was extremely professional and engaging to everyone in the room. The band delivered a genuinely exciting performance that New Orleans will never forget.

Photos and review by Jordan Hefler