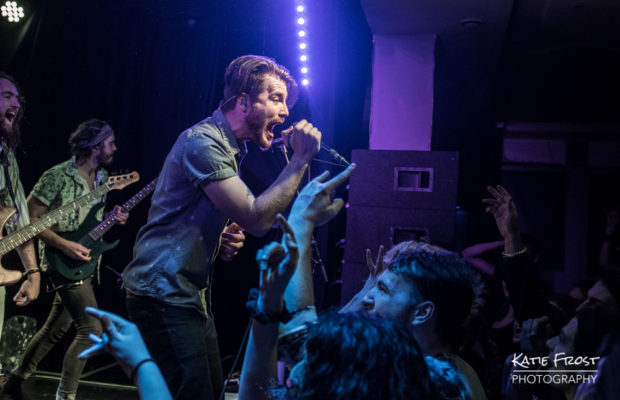 Australian rock band Hands Like Houses treated fans to two intimate shows in London and
Southampton following the cancellation of the European leg of their tour supporting Of Mice &
Men.

Of Mice & Men had battled through the UK dates of their tour but were forced to postpone the
European leg due to vocalist Austin’s health. On 10 October the band issued the following
statement on their Facebook page: “It is with our sincerest apologies that we are forced to
cancel the remaining dates on this current headline tour. We had to cut short our set in
Portsmouth on Saturday night due to Austin being in pain throughout the show. We attempted
to play the show in Cardiff the following night, but it became increasingly obvious that we were
not able to continue and that we need to focus on Austin’s health. As much as we wish we
could complete the remaining dates of this tour we know that we would be doing a disservice
to all of our loyal fans, as well as ourselves, performing under the current circumstances. The
reality is that we feel the best thing to do right now is go home, get Austin the appropriate
medical attention & regroup before we head back out on the road again. We appreciate that
our fans understand how important it is that we put health first & foremost & know that we
would never cancel shows unless we felt it absolutely necessary.”

Hands Like Houses went on to spend a few days relaxing and rehearsing in France before
returning to the UK to play their latest album ‘Dissonants’ in full at two small venues; Boston
Music Room in London, and The Joiners in Southampton. I was lucky enough to be able to
attend the London show, and this is how it went down…

On a chilly Thursday evening in North London people began to queue outside Boston Music
Room, excited to hear Canberra five-piece Hands Like Houses play their third album all the way through – front to back – for the first time ever. The show was very close to selling out, and
soon after the doors opened at 7pm the room began to fill up with fans eager to experience
this very special show.

Support came Leeds-based rock band Fizzy Blood who treated the crowd to a seven-song set
including I’m No Good, and got the crowd nicely warmed-up for the main event.
Shortly after 9pm Hands Like Houses took to the stage, and as the first notes of I Am came
pumping out of the speakers the crowd went wild. Front-man Trenton Woodley gave it his all
with his unmistakably-Australian vocals perfectly matched with the intricate guitar work, heavy
bass and powerful drumming of his band-mates – Matt Cooper (lead guitar), Alexander Pearson
(rhythm guitar), Joel Tyrrell (bass guitar) and Matt Parkitney (drums).

Hands Like Houses are always full of energy and this show was no exception as they bounced
around the small stage; clearly thrilled to be experiencing this special intimate show with their
fans. Trenton told the crowd how important is was to the band that they had the opportunity to
play the album in full, albeit due to unfortunate circumstances.

As the band was playing the album in full there were no surprises in the main set-list, but this
was a rare and exciting opportunity to hear some of the songs played live for the first and
possibly last time. Shows like this really bring an album to life as you get to experience it fully,
and in the carefully-chosen order in which the tracks appear on the record. Highlights of the
show for me included Perspectives, New Romantics, Colourblind and the crowd jumping and
singing along to the woah-ohs of the band’s bouncy and up-beat new single Degrees of
Separation.

For the encore they played two fan-favourites; No Parallels and Introduced Species, which was
the perfect end to an incredible show. Dissonants was released in February this year and the band toured the record in the UK during May & June.

Hands Like Houses are now on their way to America for the Face To Face tour with Our Last
Night, The Color Morale and Out Came The Wolves, which will take place throughout November
and December