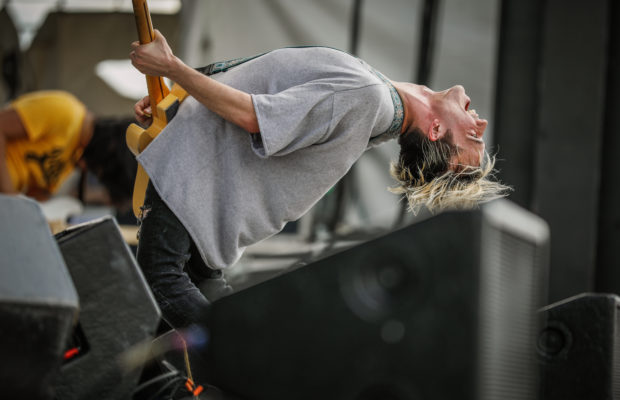 Earthday Birthday is NOT your average music festival. I actually think it would be considered more of a culture festival that just happened to have some bands playing. This was the 26th year of the festival, put on by 101.1 WJRR (Orlando’s Rock radio station), and even after all these years, they did not disappoint.

Headlining Earthday Birthday 26 was Godsmack, with a long list of amazing supporting artists including: Three Days Grace, Underoath, and Badflower. There were two main stages, The Bud Light Stage and the Amp Stage, and two smaller stages. One featured some up-and-coming artists, and the other was an indoor ‘A/C Chill Zone’ acoustic stage, which featured P.O.D., Breathing Theory, Messer, Savage After Midnight, Underoath, and Shim.

The National Anthem kicked off the event at 11:30 sharp and Thunderjack, an AC/DC tribute band, took the stage as the first act of the day. The next few acts to go on (in order) were Rivethead, Blue Stones, Eve to Adam, Glorious Sons, Badflower, Rival Sons, and Atreyu. Badflower you might know from their current radio hit ‘Ghost’ from their debut album Okay, I’m Sick which released February 22, 2019. In my case, and I’m sure the case with much of the audience, ‘Ghost’ was the only song I had heard by Badflower at the time; after their set I downloaded the whole album and I am officially a fan. They have such a unique, yet familiar, sound and with the band as a whole being so young I’m beyond excited to see how their sound will develop.

In between sets I got the chance to walk around a bit and look a little closer into what Earthday Birthday (EDBD) had to offer. A full tattoo shop was on one end of the field, offering flash sheets all day, and a wrestling ring on the other end with a BMX vert ramp right in the middle. Art vendors from all over the state came together to sell custom pieces of work; Leviathan Artworks (@leviathanartworks on Instagram) being my personal favorite, is a local screen-print artist that pays so much attention to detail and it shows in each one of his prints, shirts, and pins. As for his pins, they have to be some of the most well-made lapels I’ve purchased to date. The art at EDBD wasn’t limited to canvas, with a face painting tent that got everyone in the spirit of body painting; women danced topless with their boobs painted as well many guys who dawned glitter skulls and X’s ironically censoring their still very visible nipples.

Following Atreyu’s insanely energetic set was Motionless in White, who played their new unreleased song ‘Disguise’ for the first time. They started by urging fans to keep their cellphones down, so it didn’t end up on YouTube (sorry to the rest of you, you’re just going to have to wait for the album to be released to hear it). Next up was P.O.D. who knew how to get the crowd jumping and yelling louder than any band all day, and Pop Evil kept the same energy going throughout their whole set. Underoath played the last time slot on the Amp Stage; while the sun was setting, and before their last song they announced their upcoming North American tour with Korn and the Alice in Chains (for dates and ticket information click here). So, if you missed them this time around, don’t worry, they’ll be back.

Wrapping up the last few hours of Earthday Birthday 26 were Three Days Grace and Godsmack, who each played an hour long set filled with favorites that kept everyone singing. It was a perfect  end to a great day that was a wild, energy filled, experience and I was so happy to be a part of it. I cant wait to see you all next year!