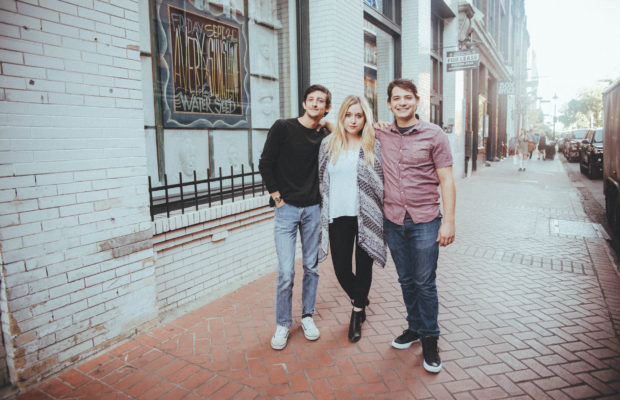 New Orleans-based rock ‘n’ roll outfit Blonde Roses recently wrapped their tour with The Spill Canvas in the states and during their stop in Louisiana, Harry Rosenberg, Albert Moliere, and Molly Portier caught up with Stitched Sound Editor Jordan Hefler and talked about what influenced their decisions to become musicians.

Harry: I know personally, at about 11 years old, I was handed a guitar from my uncle and my older cousin had been playing for a couple of years. I was always interested in music. My dad gave me my first vinyl – it was ZZ top. I just always had a knack for guitar. I just always knew in my heart that’s what I wanted to do with my life. I just wanted to play guitar in a band; I didn’t even care what kind of band it was. [I just want to] play guitar and put my music and my passion out there for people to enjoy.

Albert: I started playing piano back in fourth grade. Once I got the fundamentals of that down, I just got really interested in how many other instruments I could play that are similar. For me, it was how many instruments can I start getting into. At the time, I was real big into metal, I started playing metal way way back. That was my first experience in a band, me and Harry were in a band back in high school. With him, it was the Morning Flight, that was more of a progressive rock band, and then my metal band was called Oceans.

Molly: I still own an Oceans t-shirt!

Albert: We had a very small cult following!

Molly: I don’t know, my dad is a huge Beatles fan so I grew up listening to a lot of that. My first cassette was a Beatles cassette and that’s what I grew up listening to. So being around my family [who were] so inspired with that definitely sparked my interest in music. But my first time when I was like, ‘ok I want to do this’ was 6th or 7th grade when I saw John Mayer at Jazzfest. It was my first Jazzfest experience. He was incredible, it was my first time at a festival like that and he was on a big stage and I was like, ‘okay I want to do that.’

Portrait and Interview by Jordan Hefler