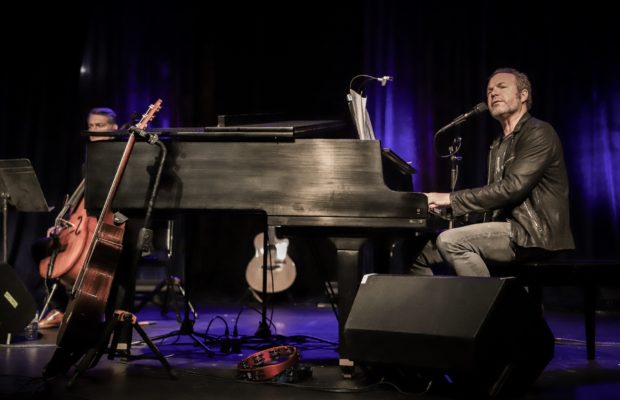 Five For Fighting with String Quartet

After talking to John Ondrasik of Five For Fighting about his upcoming tour with the String Quartet I was already very excited and had high hopes for this concert.

You can read the interview about this tour with John, here,

My expectations for this show were far succeeded and I can honestly say that they put on one of the best shows I have seen this year.

The combination of storytelling and music in a small theater simply worked. He talked about his life stories and the origins of songs in a very relaxed and intimate setting.

With him he brought some very talented string players on this tour and they got a few minutes alone on stage to show off their talents.

Five For Fighting played a combination of hits, as well as some other songs from his extensive catalog. Some of them were “The Devil In The Wishing Well”, “Chances” and “I Just Love You”, which came with a very funny back story. You can hear it on his upcoming Live CD, which will be released soon.

He told us about Augie Nieto, who battles ALS and who he wrote “Augie Nieto” for. A very inspirational story.

Each of his songs were combined with a backstory and we learned that when he receives “hate mail” it usually is a fan who is upset that a certain song was not played. Not today though, as we heard beautiful arranged versions of “Superman” and “100 Years”, as well as a fun rendition of “Bohemian Rhapsody” to close out the night.

If you get the chance to see Five For Fighting, please do yourself a favor and go check him and his string quartet out. You will not regret it.